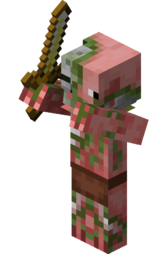 Zombie pigmen can spawn in the Nether, from nether portals, or from pigs struck by lightning. They have a 5% chance of spawning as a baby zombie pigmen.

A baby zombie pigman has a 5% chance of spawning as a chicken jockey.‌[JE only]

All zombie pigmen spawn with a golden sword, which has a small chance of being enchanted in Normal or Hard modes: from 0 to 25%. This chance varies depending on the regional difficulty as the sword's enchantment is from 5 to 19 levels.

Zombie pigmen spawn in groups of 4 in the Nether at light level 11 or lower.

They can spawn only in Nether Wastes and Crimson Forest biomes. [1]‌[upcoming: JE 1.16]

When a nether portal block in the Overworld receives a block tick, there is a rare chance (1⁄2000 on Easy, 2⁄2000 on Normal, and 3⁄2000 on Hard) it spawns a zombie pigman on the bottom part of the portal frame.

If a zombie pigman spawned in this way does not leave the portal it spawns on, there is a possibility of teleporting to the nether.

They appear near the overworld portal, not in it. In Bedrock Edition, they spawn one block to the east or south of the portal (depending on which direction the portal is facing) and neither half slabs nor lighting prevents this.

Even if the pig is a baby, the zombie pigman still spawns as an adult.‌[JE only] [until JE 1.16]

A piglin that enters the overworld transforms into a zombified piglin after 20 seconds.‌[upcoming: JE 1.16]

Deaths of hostile zombie pigmen always register as kills by the player they are targeting, regardless of whether that player ever touched that pigman:[2]‌[JE only] the player can use this to construct zombie pigman experience farms.[3]

The golden swords that are dropped have 26 to 33 of durability.

Zombified piglins move slowly. They are immune to both fire and lava damage. When provoked, their speed increases to the player's walking speed, or faster for babies.

Like zombies and husks, zombie pigmen bang on wooden doors and on Hard difficulty, they may break them.[4]

In Normal and Hard, up to 55% of zombie pigmen can pick up items, including weapons they feel are better than their golden sword, which they drop with the same chance as if killed with Looting I (9.5%).

Zombified piglins try to destroy any turtle eggs they see within 23 blocks away, not counting the block they are standing in.

Zombified piglins are not initially hostile, but all zombie pigmen within a 67×67×21 to 111×111×21 area centered on the attacked zombie pigman become aggressive and converge on the player (all of the players if you are in multiplayer mode) if any individual is attacked, unless the zombie pigman attacked is killed in one hit.‌[Java Edition only] In addition, some zombie pigmen have the ability to spawn reinforcements when attacked (similar to zombies and which can rarely include actual zombies). This applies to any hit registered as coming from the player or other mobs, including deflected ghast fireballs, from sweep attacks, snowballs/eggs, or a skeleton arrow. This does not include fireworks shot from crossbows, or dispenser-shot arrows.

Zombified piglins remain hostile from 20 seconds to 27 minutes[5] (limited by the Anger NBT tag type). Approaching within 35 blocks of an already hostile zombie pigman causes it to sound an alarm call, angering other zombie pigmen in a 40-block radius. The forgiveness timer does not advance for zombie pigmen in unloaded chunks. Therefore, if the player enters a Nether portal and returns, any provoked zombie pigmen in the area remain aggressive unless another player was nearby to keep the chunks loaded. Dying does not cause zombie pigmen to become neutral toward the player. They pursue a player even if they have the Invisibility effect.

Neutral zombie pigmen do not prevent a player from sleeping.‌[JE only]

If a mob provokes zombie pigmen, they become aggressive toward that mob, and when the mob is killed they remain aggressive for seconds and attack any nearby player without provocation.‌[JE only]

Zombified piglins have entity data associated with them that contain various properties of the mob.

Issues relating to "Zombie Pigman" are maintained on the bug tracker. Report issues there.