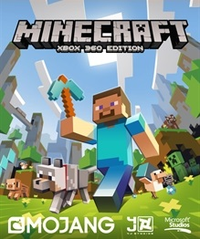 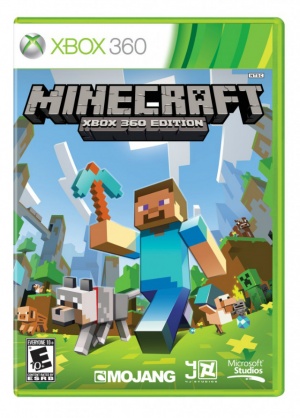 Minecraft: Xbox 360 Edition is the Xbox 360 edition of Minecraft developed by 4J Studios in conjunction with Mojang Studios and Microsoft Studios.[9] It was announced at the 2011 E3 conference by Notch and Microsoft, and was released alongside a free trial version on May 9, 2012 on Xbox Live Arcade. It is priced at $19.99.

Although the Xbox 360 console has been discontinued, Xbox 360 Edition continued to get feature updates until the release of Update Aquatic.[10]

On June 4, 2013, Microsoft released the first retail disc of Xbox 360 Edition with a free gold membership. It cost US$19.99, the same price as the Xbox Arcade version. The game otherwise is identical to the downloadable version. Features such as buying or downloading on Xbox Live are the same for both versions and they both update at the same time. It was released in regions or countries supported by Xbox Live.

The game was showcased as a playable demo at MINECON 2011 and was deemed a 'work in progress'.[11] 4J Studios confirmed that it had all the features of Java Edition Beta 1.6.6 when released, and will later be updated. IGN also filmed a video at MINECON showing that the graphics look very similar to Java Edition.[12]

Notch later announced the team developing the game would be 4J Studios.[13][14] Daniel Kaplan tweeted about receiving an early copy of Xbox 360 Edition on September 7, 2011.[15]

In October 2011, Microsoft said the release was planned for Spring 2012.[16] On March 22, the official release date was posted by Larry Hryb, the Director of Programming for Xbox Live, as May 9,[17] and a few days before the game release, HatFilms released "the official trailer" for Xbox 360 Edition.

The game was officially released on May 9, 2012, and set a new sales records on the Xbox Live Arcade, selling more copies in the first twenty four hours of launch than previous titles.[18]

The retail disc version was released on June 4, 2013, being exactly the same as the arcade version, with the exception of internet requirement to play.

4J Studios has produced Skin Packs as downloadable content. Each Skin Pack includes ~45 skins to choose from. The first Skin Pack, Skin Pack 1, was released July 16, 2012 at a cost of US$1.99. The Skin Pack contains characters from Xbox 360 games, such as Master Chief from Halo. The Skin Pack also include various original designs created by 4J Studios. On Minecraft Xbox 360's birthday the player can download special skinpacks for free. There are many more skin packs added. One is a Christmas Themed Skin Pack. There is also a Marvel Skin Pack, a Spider-Man Skin Pack and Animal Skin Packs. In total there are more than 10 skin packs.

In default settings, the controls are always displayed on the HUD.

The bundle was meant to be a discount for the Marvel Skin Packs. On December 22, 2015, the bundle was removed from the Xbox Marketplace, thus being no longer available for the Xbox One and the Xbox 360. This bundle costed $6.99 and was available in the Xbox One and the Xbox 360.[20][21] The Marvel Skin Packs from the bundle still transfer to Bedrock Edition, but they are not usable in online or LAN multiplayer.

Note: As with the PlayStation 3 and the Xbox One trailer, this one was also created by Hat Films.