This article is about the villager that was struck by lightning. For the mob found in regular villages, see Villager. For zombified villager, see Zombie Villager. For the antagonistic variant, see Illager.

Witches are uncommon hostile mobs that use harmful splash potions as ranged weapons and beneficial potions on themselves defensively. While dangerous, they are a source of valuable potion ingredients.

Solitary witches spawn in the Overworld at a light level of 7 or less OR when a villager is struck by lightning. It spawns in all land biomes except mushroom fields.

Witches are the least common within the usual monsters, using a weight of 5.

Every swamp hut spawns a witch and a black cat inside during world generation, they never despawn. Otherwise, only witches (which may despawn) spawn in the 7×7×9 (x×y×z) volume that is the hut. This is the size of the roof and one block over the porch, from one level below the floor of the hut to two blocks above the roof.

Witches respawn on only one block within the swamp hut.

When lightning strikes within 4 blocks of an adult villager or baby villager, it transforms into a witch. Witch spawned this way can't despawn.

Witches can spawn starting at wave 3 as part of raids.

Witches have an 8.5% chance to drop a potion as an equipment drop. They do not have to be drinking the potion to drop it, because there is a delay between when they choose to drink a potion and when they actually are shown drinking it.

Looting increases the chance by 1% per level. To make a witch drink a potion that can then be dropped, the player can:

They are passive toward villagers and wandering traders.

Witches use tier I splash potions offensively, remaining up to 10 blocks away from players and drinking potions defensively. They have a search radius of 16 blocks.

Each potion is thrown in a 2 seconds interval.

On each tick (0.05 second) when the witch is not already drinking a potion, it may choose to equip and drink a potion. Drinking the potion takes 1.6 seconds and slows down its walking speed. It does not attack during this time.

Witches are 85% resistant to some types of magical damage, including Poison, Instant Damage, Evoker Fangs, and the Thorns enchantment.

× 5.5 and below) with Regeneration (45 seconds) and healing splash potions.

If raiding witches or other mobs kill all the villagers in a village, they celebrate their victory by jumping and laughing.

In Java Edition, witches do not retaliate when attacked by evoker fangs or illager-inflicted arrows. Instead, they drink a healing potion. 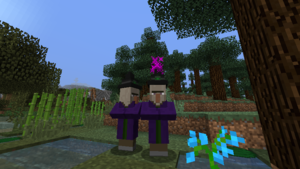 Witches are immune to Poison and Fatal Poison. Witches can locate targets even if they are behind blocks and are hostile to iron golems.

They are the only mobs that fight back against ghasts when hit by their fireballs. Witches can be attacked by undead mobs if they accidentally provoke them using splash potions of poison, weakness, slowness, and healing.

During raids, they spawn at wave 4.

Witches rarely (1.5% each second) spawn from 10 to 45 purple magic particles above their heads. These particles are named "Witch"‌[JE only] or "Witchspell".‌[BE only]

Witches have entity data associated with them that contains various properties.