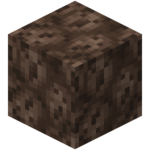 For the similar block that does not slow entities down, see Soul Soil.

Soul sand is a block found naturally only in the Nether. Soul sand slows down the movement of mobs and players standing on it. It is also used for growing nether wart and for constructing a Wither.

Soul sand is found below Y=65 in the nether wastes, generally in four-block-deep layers. It is also found naturally in nether wart rooms of nether fortresses. Soul sand also generate in bastion remnants.‌[upcoming: JE 1.16 & BE 1.16.0]

‌In Java Edition 1.16 and Bedrock Edition 1.16.0‌[upcoming], soul sand can generate in the Nether in the form of mineral veins. Soul sand attempts to generate 12 times per chunk in veins of size 1-12, from altitudes 0 to 31, in soul sand valleys.

Soul sand can be mined with any tool, or without a tool, but shovels are the quickest.

Soul sand slows the movement of any mob or player and causes them to sink 2 pixels into the block while walking on it.

Soul sand is used for growing nether wart, a primary base ingredient for many varieties of potions. Nether wart is planted on soul sand (like seeds on farmland), and at full maturity produces multiple nether warts when harvested.

4 blocks of soul sand (or soul soil) are used in the construction of a wither.

Fire cannot be lit on soul sand without commands.[until 1.16]