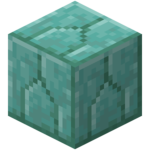 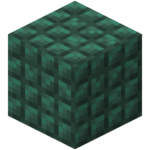 Prismarine is a type of stone that appears underwater in ruins and ocean monuments. It periodically changes color between blue and green.

All types of prismarine can be mined using any pickaxe to drop itself. If mined without a pickaxe, the block drops nothing.

Prismarine drops itself when broken with the correct tool if any is assigned. Refer to the Obtaining section for more info.

Prismarine Bricks drops itself when broken with the correct tool if any is assigned. Refer to the Obtaining section for more info.

Dark Prismarine drops itself when broken with the correct tool if any is assigned. Refer to the Obtaining section for more info.