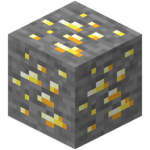 This article is about the overworld ore. For the nether ore, see Nether Gold Ore. For the item, see Gold Ingot. For the mineral block, see Block of Gold. For the nugget, see Gold Nugget.

Gold ore is one of the rarest types of mineral blocks found underground.

Gold ore can generate in the Overworld in the form of mineral veins. Gold ore attempts to generate 2 times per chunk in veins of size 1-9, from levels 0 to 31, in all biomes.

Gold ore also attempts to generate 20 times per chunk in veins of size 1-9, from levels 32 to 79, within any type of badlands, or within a chunk that is at least partially occupied by such a biome.