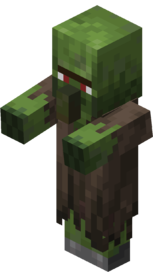 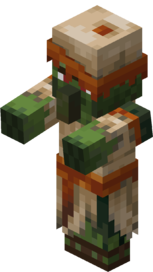 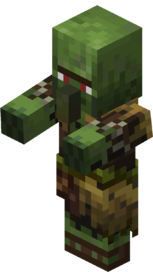 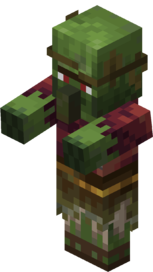 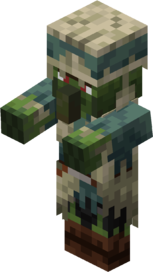 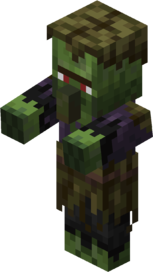 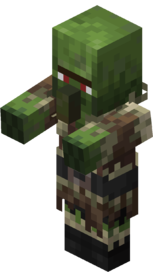 This article is about the villager-variant of the zombie. For the villager, see Villager. For other variants, see Zombie (disambiguation).

Zombie villagers are variants of zombies that can be cured into normal villagers using golden apples and weakness potions.

Zombies that are not husks have a 5% chance of naturally spawning as zombie villagers.

In Bedrock Edition, version-2 zombie villagers spawn when villagers are killed by zombies, from a zombie spawner or from an igloo's basement. Unemployed plains zombie villager spawn naturally regardless of biomes.

If any type of zombie kills a villager, there is a chance for the villager to transform into a zombie villager. Zombie villagers spawned this way can despawn only by chunk unloading.

Armor worn by zombie villagers is not damaged from most damage sources, which means it cannot "wear out" the way player armor does. Helmets (not blocks like pumpkins) on zombie villagers can wear away and break, if the zombie villager is exposed to daylight or has an anvil or other falling block dropped on its head. Zombie villagers also have a natural armor rating of 2 (

), which gives 1.6 - 4% damage reduction from most sources. Farmer Zombie villagers are immune to sunlight due to having a hat.[verify]

A zombie villager retains its biome and profession after conversion from a villager. They also retain their trades. Below is a table of the variant and what workstation it required before zombification.

Unlike regular zombies, zombie villagers do not drown, and remain unchanged from being submerged.

Like zombies, they trample turtle eggs to destroy them.

If the zombie villager is wearing any armor or wielding tools or weapons, those items disappear when the villager is cured and are not dropped on the ground.

The newly-cured villager offers a large discount on their trades to the player who cured them, along with any other villagers in the area. The discounts from curing a zombie villager persist permanently in Java Edition, or depending on whether the player trades with the cured villager in Bedrock Edition, 4 in-game days or longer.[more information needed][2] It is also possible for cured villagers to become nitwits, meaning that they cannot offer discounted trades. In Java Edition, this spreads major_positive gossip part of the villager gossip system.

Zombie villagers have entity data associated with them that contain various properties of the mob.

Note: Zombie villagers have a different texture as of Village and Pillage.