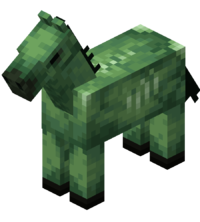 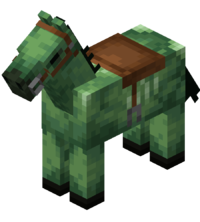 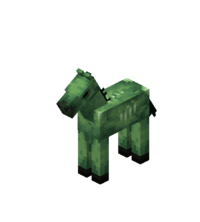 Zombie horses may be created by the /summon command or with their spawn egg. When using spawn egg, 20% spawn as foals. Also, in Bedrock edition, they will also spawn with a spawn egg.

Tamed and saddled zombie horses can be used as one of the fastest means of transportation in the game. They can also be used to climb hills and jump fences. Since Java Edition 1.13, a bug has existed preventing them from being ridden in water; if the player passenger is completely submerged, they are immediately kicked off of the horse.[1]

Zombie horses, like most mobs, can ride in minecarts and boats.

Zombie horses have entity data associated with them that contain various properties.