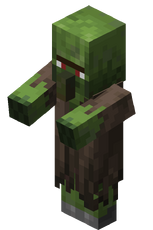 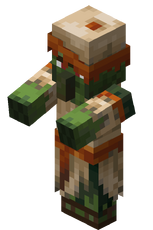 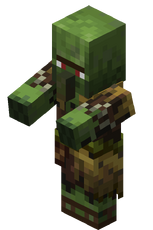 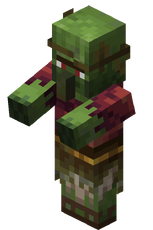 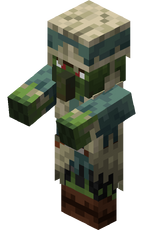 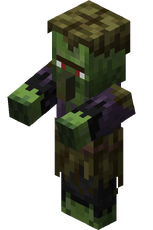 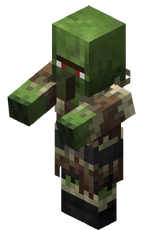 Zombie villagers are variants of zombies that can be cured into normal villagers using golden apples and under the effect of Weakness.

A cleric zombie villager appears alongside a cleric villager in every igloo basement. One of them transforms into leatherworker, due to the workstation. They also generate as part of abandoned villages. Zombie villagers generated in both of these structures do not despawn naturally.

All mobs that can be ridden by baby zombie villagers in Bedrock Edition.

Armor worn by zombie villagers is not damaged from most damage sources, which means it cannot "wear out" the way player armor does. Helmets (not blocks like pumpkins) on zombie villagers can wear away and break, if the zombie villager is exposed to daylight or has an anvil or other falling block dropped on its head. Zombie villagers also have a natural armor rating of 2 (

A zombie villager retains its biome and profession after conversion from a villager. They also retain their trades. Below is a table of the variant and what workstation it required before zombification. In Bedrock Edition, zombie villagers do not display their professions, but they still have the same profession after curing as before zombification. They use the texture of an unemployed villager from their corresponding biome.

Any picked-up equipment has a 100% chance of dropping on death or when cured and drops with the same damage level it had when picked up.

Zombie villagers behave as ordinary zombies, except that they do not convert to drowned when submerged.

Conversion time is initially determined by picking a random integer between 3600 and 6000, representing the number of ticks. On every tick, the conversion time decreases by 1, and there is a 1% chance for the game to look for up to 14 iron bars and beds within a 9x9x9 cube centered on the villager; each one found has a 30% chance to decrease the conversion time by 1 more for that tick. The top and bottom halves of a bed are counted separately. Therefore, having at least 14 half-beds and/or iron bars within range of a zombie villager speeds up conversion by an average of 4.2%.[1]

If the zombie villager is wearing any armor or wielding tools or weapons, those items disappear when the villager is cured and are not dropped on the ground. However, any items they picked up are dropped.

Zombie villagers that are in the process of converting do not despawn if the player moves far away from them.

Zombie villagers have entity data associated with them that contains various properties.

Note: Zombie villagers have a different texture as of Village and Pillage. Also, they have new sounds.