From Minecraft Wiki
Jump to: navigation, search
This article is about the area at the edge of the world. For the phenomenon that existed before Beta 1.8, see Far Lands. For the customizable border wall, see World border. For effects which occur at high distances due to numerical precision loss, see Java Edition distance effects.

The world boundary is the area defining the intended edge of the Minecraft world. 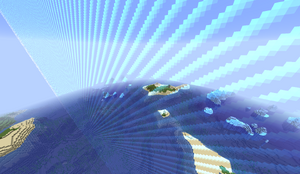 The world border is located at X/Z ±29,999,984. Chunks still generate past this point, but the player cannot go past ±30 million blocks out.

The boundary of the world has several "layers".

The first layer is the world border, which lies at X/Z ±29,999,984 by default, and establishes an arbitrary blockade to prevent the player from advancing. There are several methods of bypassing this border.

The second layer lies exactly one chunk further, at X/Z: ±30,000,000. At this point, there is an invisible "wall" preventing the player from advancing by setting any players' positions beyond it to it, even in spectator mode. Using commands like /teleport does not work, since the game does not accept any value beyond X/Z: ±30,000,000. This value is hard-coded into the game's source code. Other block interactions, such as TNT exploding or water flowing, affects blocks outside this limit. By using a minecart (in a superflat preset with the top layer as rails), the player can go even further, up to X/Z: ±30,000,496. At that point, the player is frozen in place until the minecart is destroyed, then they are teleported back to X/Z: ±30,000,000. 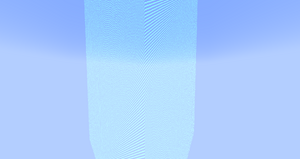 The world border from the outside using the /tp command.

The third and final layer lies at X/Z: ±30,000,496, which can be considered the absolute edge of the Minecraft world, as chunks no longer generate beyond this point, so it's impossible to advance past this point without the use of modifications.

The maximum possible height is 1.798×10308 (21024), the limit where mathematics break down in the game's code. In attempting to teleport beyond this limit, the game interprets the number as infinity and refuses to carry out the teleportation.

By editing the source code for the game, it is possible to extend the terrain generation and world border past X/Z: ±30,000,240 (up to X/Z: ±2,147,483,647) and experience the game quite normally (no ghost chunks; mobs can spawn alright; commands accept higher values). The game performs normally even at distances of X/Z: ±1,000,000,000. At greater distances, block lag starts to become noticeable, and mobs behave strangely. A hard limit exists at X/Z: ±2,147,483,647—the mathematical limit of a signed 32-bit integer—and attempting to travel or load chunks near here simply causes the game to crash. It is advisable to set the world border to at most several hundred blocks before this limit. Lighting ceases to work past 225 and everything becomes absolutely dark unless with the night vision effect. Entering a nether portal at this point would teleport the player to X/Z ±268,435,455 (228 − 1) in the world you typed

Beyond this, most of the unintended behavior of blocks and entities is caused by the world border (as detailed here, rather than the massive distances of the boundary itself.

Issues relating to "World boundary" are maintained on the bug tracker. Report issues there.