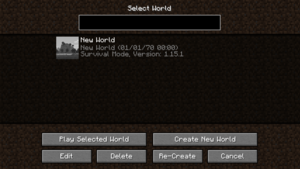 A world (formerly level) is an individual Minecraft "universe" which encompasses an instance each of the Overworld, the Nether and the End. Worlds can be accessed through the world selection screen from the main menu and can be created with the "Create New World" button.

Worlds are split into three dimensions, which are in turn composed of blocks of various sizes, usually either cubic or composed of one or more cuboids, or of flat plane images, all of which are arranged in a Euclidean grid. Fluids, entities and particles also exist within these worlds, and certain locations of the world can possess biomes and different levels of light. Blocks and entities can possess other attributes such as items, status effects and, by extension, enchantments. Various structures can also generate inside worlds (provided that the 'Generate structures' world option is turned on), sometimes containing chests with loot inside.

Each world is saved in its own separate folder in the games/com.mojang/minecraftWorlds[1] folder. All chunks related to all dimensions are stored in the dbi folder.