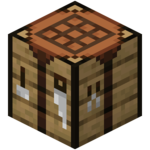 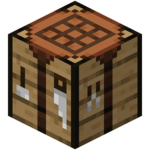 A crafting table allows the player to craft a variety of blocks and items.

Crafting tables can be mined with or without any tool, but axes are the quickest.

Pressing use on a crafting table opens the 3×3 crafting grid that allows the player to craft many more items than are available with the crafting grid in the inventory, which is only 2×2.

The recipe book is available to the left of the crafting grid (collapsed by default in Java Edition, expanded by default in Bedrock Edition), which stores crafting recipes for reference and one-click crafting.

Crafting tables can be used as a fuel in furnaces, smelting 1.5 items per crafting table. 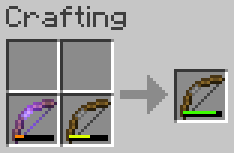 A crafting table can be used to repair damaged tools, weapons, and armor. When two damaged items of the same material are combined side-by-side in the crafting grid they produce a new item with the sum of the durabilities plus a 5% bonus, with a maximum total of 100% durability for that item. Using this method does not require any experience, but removes any enchantments on either or both items. The only way to retain enchantments is to repair damaged items on an anvil.

Issues relating to "Crafting Table" are maintained on the bug tracker. Report issues there.