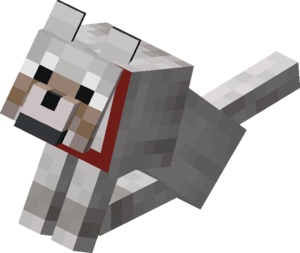 A tamed wolf "begging" the player for food. 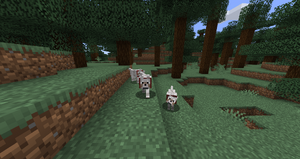 A wolf becomes hostile to a player or other mob that attacks it unless the attacker is the wolf's owner or is otherwise on the same team. It also causes wild wolves and standing tamed wolves in a 33×33×21 cuboid centered on the attacked wolf to become hostile to the attacker, allowing coordination for attacks, and team hunts (only in Wild Wolves).

Skeletons and their variants, foxes, baby turtles, and passive rabbits actively avoid both tamed and wild wolves. Killer rabbits‌[JE only] attack wolves actively. Sheep ignore wolves, but flee when attacked by one.

When the player holds meat or bones in front of the wolf, the wolf tilts its head as if to 'beg' for the food.

In peaceful difficulty, wild wolves are always passive to the player, even when attacked.

Standing tamed wolves wander randomly when near their owner, but follow if more than 10 blocks away, and teleport to a nearby free block (if any) if more than 12 blocks away. Besides making travel easier, teleportation can be used to rescue them from lava, water or pits, as they immediately teleport to a safe area. 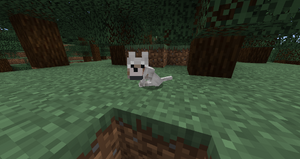