From Minecraft Wiki
(Redirected from Wither skeleton)
Jump to: navigation, search
This article is about the skeleton variant. For the boss, see Wither.
Wither Skeleton 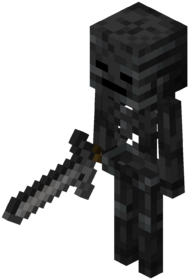 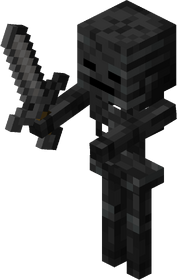 Wither skeletons are hostile mobs and variants of Skeletons with stone swords found in fortresses.

Wither skeletons spawn in fortresses in the Nether at a light level of 7 or less, in groups of 4. Unlike any other mob, they can also spawn on wither roses in fortresses.

In normal or hard difficulties, some wither skeletons may have the capacity to pick up dropped gear. The chance depends on regional difficulty, with up to 55% of them equipping dropped iron, diamond or netherite swords and any armor.

Although they may hold them, wither skeletons never take bows; if they hold a bow (which can be done with /summon wither_skeleton ~ ~ ~ {HandItems:[{id:bow,Count:1b}]}) they shoot flaming arrows even if their bows are unenchanted. They cannot use crossbows.

Wither skeleton have entity data associated with them that contains various properties.