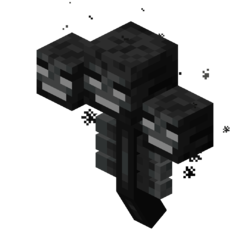 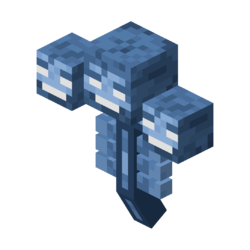 The wither is an undead boss mob that floats and shoots explosive skulls at players and mobs. It is currently the only player-made hostile mob in the game.

The fight varies across editions; the Bedrock wither has twice as much health and different attacks as its Java counterpart.

They drop 50 experience points and a nether star, a crafting ingredient for beacons. 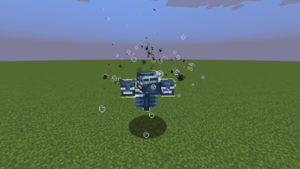 Wither when spawned with its blue shield.

The wither is spawned by placing 4 blocks of soul sand or soul soil in a T shape (see top imageimage to the left), and putting 3 wither skeleton skulls on top of the three upper blocks. The last block placed must be one of the three skulls and can be placed by the player or a dispenser. Air blocks are required on either side of the base soul sand block under the upper blocks (non-solid blocks such as tall grass and flowers still prevent the Wither from spawning). The building pattern can have any orientation (including horizontal and upside-down) as well as the skulls; the wither always spawns at the foot of the pattern. When the wither has successfully spawned, it is angered and creates an explosion around itself.

Like other hostile mobs, the wither despawns when the difficulty is changed to Peaceful. The wither spawning structure also fails in Peaceful difficulty; the blocks simply do nothing.

The wither always drops one nether star upon death. The dropped nether star takes ten minutes to despawn, twice as long as normal items. It cannot be destroyed by explosions, as all dropped nether stars are immune to them. The Looting enchantment does not increase this drop. It also drops 50 when killed by a player or a tamed wolf. 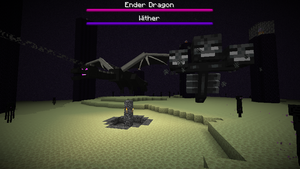 The difference between the ender dragon's boss bar and the wither's boss bar.

When spawned, the wither grows larger in size as its health bar fills up. While in this state, the wither is invulnerable, and neither moves nor attacks. When this state ends (after 10 seconds), the wither creates a very large explosion centered on itself, destroying nearby blocks and dealing up to 68

× 34 damage to nearby mobs/players. This "birth" explosion is larger than that of a charged creeper or an end crystal and is accompanied by a loud gruesome sound that can be heard equally from across the map and in all dimensions. After this, the wither attacks nearby mobs and can take damage.

The wither is immune to fire, lava and drowning damage. Suffocation is ineffective, since upon taking damage, the wither breaks any block it touches (except bedrock, end gateway blocks, end portal blocks, end portal frames, command blocks, structure blocks, jigsaw blocks, barriers and moving pistons). Like other undead mobs, the wither is harmed by the Instant Health effect and healed by the Instant Damage effect. It is immune to all other status effects, like the ender dragon. However, it takes extra damage from weapons with the Smite enchantment.

The wither is hostile toward all mobs except:

If the wither is idle, it simply hovers and is unable to gain altitude. On Normal or Hard difficulty, it fires blue skulls in random directions until it finds a target.

The wither has a dark purple boss health bar that appears only when a player is looking in the wither's direction, including through walls. When looking at the wither, the world gets slightly darker. All withers display a boss bar on the screen. 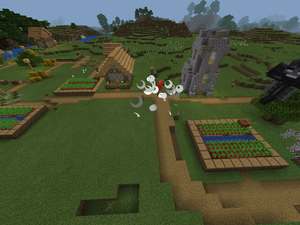 The wither killing a villager.

Upon noticing a mob, the wither hovers above it and rapidly shoots black wither skulls. Each head fires independently, allowing a wither to attack up to three different mobs/players at the same time. The main head controls the Wither's movement, and has a 0.1% chance to shoot a blue wither skull instead of the default black one.

Whenever a wither kills another mob, a wither rose is either planted or dropped as an item at that mob's location; however it may be destroyed by other wither skulls.

The wither has a passive regeneration rate of 1

every 20 ticks (1 second), and a direct killing blow on a target instantly heals 5

When its health drops below half (150

× 75), the wither gains a natural "wither armor" effect, which makes it immune to damage from arrows and thrown tridents and causes it to fly at the same height as the player. The armor disappears if it regenerates above half health.

Upon noticing a player or mob, the wither flies to a random location and hovers in place. It shoots 3 black wither skulls and one blue wither skull before flying to another location.

At half health, it causes a large explosion that spawns 3–4 wither skeletons (except on Easy difficulty), as well as gaining wither armor. Instead of flying to a random location, it dashes toward its target, destroying blocks and damaging mobs in its path. It also fires up to 4 skulls per burst: three black skulls followed by one blue skull. It has different spawn and death animations, both of which involve the wither exploding.

Wither roses always drop as an item when the Wither kills a mob.

The sky light level drops to 11 from the moment the wither spawns until it is dead, preventing zombies, skeletons, and drowned from burning in sunlight. 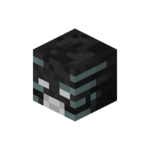 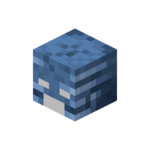 The wither rapidly fires explosive projectiles called wither skulls, which look like extra heads of itself, at its target. There are two types of wither skulls: a fast-moving black one, and a slower blue one. Black wither skulls explode with a blast power of 1, the same as a ghast's fireball, and cannot break blocks with a blast resistance above 4. The blue wither skull has the same explosion strength, but moves slower and treats all blocks except for a few "unbreakable" blocks as having a blast resistance of no more than 0.8, making it more destructive to the terrain. This means that blue wither skulls can break obsidian. This doesn't apply to unbreakable blocks, like bedrock or an end portal frame.

If either type of wither skull hits a player or mob, it does 8

) and drains health, similarly to poison. However unlike poison, it can kill the player.

Like other status effects, the wither effect can be cured by drinking milk.

In Bedrock Edition, the blue skull can be deflected by hitting it with hand or throwable entities (similar to ghast fireballs).

Wither skulls are also entities that have associated entity data.

Withers have entity data associated with them that contain various properties of the mob.

Issues relating to "Wither" are maintained on the bug tracker. Report issues there.