From Minecraft Wiki
Jump to: navigation, search
This article is about the block. For the bucket, see Water Bucket. For other forms of water, see Water (disambiguation).
Water 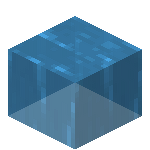 Water is a natural fluid that generates abundantly in the Overworld.

A typical lake of water.

Water blocks do not exist as items,‌[Java Edition only] but water can be collected by using a bucket on a water source block or a full cauldron.

In Bedrock Edition, it may be obtained as an item via inventory editing.

Water naturally generates in the Overworld to form oceans, lakes, rivers and springs. It also generates in villages, desert wells, strongholds, woodland mansions, and ocean monuments. Water never generates in the Nether and instantly disappears or evaporates into steam if placed there with a bucket. However, water can be placed in the Nether in a cauldron. In Bedrock Edition, water also generates as part of underwater ruins with loot chests, but only two water blocks generate:

It is unknown whether this is intentional.[1] This is not the case in Java Edition; if an underwater ruin generates on the surface, no water generates.[2] This also happens with shipwrecks.

Technically, water generates below layer 63 by replacing air blocks that are not part of a cave or other structure, although underwater caves and underwater ravines become flooded with water.

The texture of water in Bedrock Edition is somewhat different from the current Java Edition texture, as it uses the pre-1.13 texture.

Swimming in water is considerably slower against currents (see Current below), but faster when going with the current.

Most mobs that can stand can also swim any time they are in water, except for iron golems and undead mobs. This can lead to drowning if the water is falling from above.

Water of any depth prevents any entity, including the player, from sustaining falling damage if they fall into it, regardless of the distance fallen. 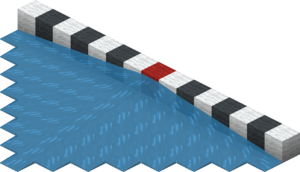 When spreading horizontally, a weight is assigned to every direction water can flow. For each direction, this weight is initially set to 999[verify]. Then, for every adjacent block it can flow into it tries to find a way down that is reachable in four or fewer blocks from the block it wants to flow to. When found, the flow weight for that direction is set to the shortest path distance to the way down. Finally, water spreads in the directions with the lowest flow weight.

Spreading water extinguishes fire and washes away certain types of items or placed blocks, causing them to drop as items and then carrying them along in the flow until the edge of the spread. Affected items include plants (except trees), snow, torches, carpets, rails,‌[Java Edition only] redstone dust and some other redstone components, cobweb, end rods, mob heads, and flower pots.

The current in a water block determines both the direction it appears to flow and the direction an entity such as a player or boat is pushed from that block.

Water with a current pushes players and mobs at a speed of about 1.39 meters per second, or 25 blocks every 18 seconds. Players that are in creative flying mode don’t get pushed.‌[Java Edition only][3]

The horizontal current in a water block is based on a vector sum of the flows to and from that block from its four horizontal neighbors. For example, if a block receives water from the north and sends it both south and east, but borders a solid block on its west edge, then a south-southeast current exits from that block, because 2 southward flows (in and out) are combined with 1 eastward flow (out). Thus, 16 horizontal directions are possible. If a branch in a channel is 2 blocks wide at its entrance, then entities float into it rather than continuing in a straight line.

In Bedrock Edition, every block of water reduces light by 1 extra level (in addition to the normal fading-out of light). In Java Edition, water does not cause any additional decrease for block light, but diffuses sky light, causing the light to fade with depth. Underwater visibility changes depending on the biome the player is in. The Night Vision and Conduit Power effects increase underwater visibility.

Water has several colors, depending on the biome.

This section's factual accuracy may be compromised due to out-of-date information.
The reason given is: Nether biome colors in the Nether Update
Please update this section to reflect recent updates or newly available information.

Water damages endermen, snow golems, striders and blazes, at a rate of 1

per half second. If water comes into contact with a shulker or an enderman, the mob teleports away.

Players and mobs (except fish, turtles, dolphins, squid, guardians, elder guardians, undeads and iron golems) have a breath meter that lasts 15 seconds. After they run out of breath, they take 2

drowning damage every second until they die or surface.

Dolphins are a special case in drowning: they take drowning damage when underwater for about 4 minutes, but also take suffocation damage when in air for about 2 minutes.

Each level of the Respiration enchantment adds 15 seconds to the breath meter and grant an x/(x+1) chance (where x is the Respiration level) of not taking damage after that time: 30 seconds and an average 1

When water comes into contact with concrete powder, the powder hardens into solid concrete.

When a dry sponge comes into contact with a water source or flowing block, it becomes a wet sponge, absorbing all of the water within 3 to 5 blocks in all directions. Kelp and lily pads within the absorbed water blocks are destroyed and drop as items, and seagrass is destroyed without dropping anything. Mobs that take damage out of water are affected as a side-effect.

Sponges do not absorb water from waterlogged blocks, nor water that comes into contact by flowing back in from outside the area of absorption. For instance, placing a sponge 4 or more blocks from a single water source removes the flowing water in the area of effect, but as the flow from the source resumes it is not affected by the wet sponge.

A sponge instantly absorbs nearby water when it is placed next to water or when water comes into contact with it (by being placed next to the sponge, or by flowing toward it). A sponge absorbs water around itself (water source blocks or flowing water) out to a taxicab distance of 7 in all directions (including up and down), but won't absorb more than 65 blocks of water (water closest to the sponge is absorbed first). The absorption propagates only from water to water and does not "jump over" non-water blocks (including air).

Water above a non-transparent block (does not include stairs, fences, and slabs) produces dripping particles on the underside of that block. These droplets are purely aesthetic.

Water spends most of its time as stationary, rather than 'flowing' – regardless of its level, or whether it contains a current downward or to the side. When specifically triggered by a block update, water changes to 'flowing', updates its level, then changes back to stationary. Water springs are generated as flowing, and oceans, lakes, and rivers are generated as stationary. This happens before most types of generated structure are created, and the main cause of water "glitches" is that generated structures do not trigger a block update to let water flow into them.

If bit 0x8 is set, this liquid is "falling" and spreads only downward. At this level, the lower bits are essentially ignored, because this block is then at its highest fluid level.

The lower three bits are the fluid block's level. 0x0 is the highest fluid level (not necessarily filling the block - this depends on the neighboring fluid blocks above each upper corner of the block). Data values increase as the fluid level of the block drops: 0x1 is next highest, 0x2 lower, on through 0x7, the lowest fluid level. Along a line on a flat plane, water drops one level per meter from the source.

This page would benefit from the addition of isometric renders.
Please remove this notice once you've added suitable isometric renders to the article.
The specific instructions are:
This section is missing information about Perhaps a subsection of how water's texture was formerly generated? Some documentation exists at https://github.com/UnknownShadow200/ClassiCube/wiki/MInecraft-Classic-lava-animation-algorithm.
Please expand the section to include this information. Further details may exist on the talk page.

Issues relating to "Water" are maintained on the bug tracker. Report issues there.