This article is about the common light-emitting torch. For other uses, see Torch (disambiguation).

Torches can be found randomly generated among the supports in an abandoned mineshaft's corridors, various rooms in strongholds, as part of village lamp posts, in the basements of igloos, in woodland mansions, and in pillager outposts. Torches generate around bonus chests if each side has a block at the same height around it. In The End, torches generate as part of the exit portal, around the second pillar block from top. Whenever the Ender Dragon dies or respawns, these torches regenerate.

A torch breaks instantly and drops itself when broken using anything. Tools do not lose durability when used to break torches.

A torch also breaks if flowing water runs over its location, or if a piston pushes the torch or its attached block. 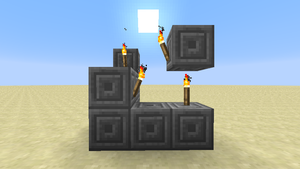 Torches can be placed on the top or the sides of most solid blocks, although some blocks require sneaking (see § Placement for exceptions). Being non-solid, torches have no collision box. More information about placement can be found at Opacity/Placement.

Gravity-affected blocks like sand and gravel cannot fall if the space immediately beneath is occupied by a torch. These blocks break if they fall onto a torch.

Torches give off a light level of 14. Torches also melt snow layers within 2 blocks and ice within 3 blocks (taxicab distance).

More information can be found at Opacity/Placement.

In Bedrock Edition, torches use the following data values:

Notch originally planned for torches to become temporary light sources that would eventually burn out[5] and require re-lighting with flint and steel. This feature was briefly reintroduced on the April Fools' hoax version 2.0, but the feature was not kept in later versions. This was originally planned to take effect on October 31, 2010 with the Halloween Update, in which all torches placed earlier would become lanterns due to the change of the data value, but it did not happen.[6] The Lantern, however, was later introduced into the game in 1.14.