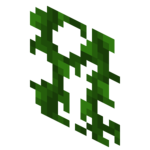 Not to be confused with Weeping Vines or Twisting Vines.

Vines are non-solid blocks, 1⁄16 of a block in thickness that can be placed only against a vertical side of a solid block. They also can be supported by a solid block ceilings if adjacent to a solid vertical wall.

Vines are naturally generated in jungles and swamps. Jungle trees of both sizes have vines on their trunks and canopy edges, and vines grow on the sides of jungle terrain. Vines are also naturally generated in oak trees in swamps. They are found in jungle temples and woodland mansions allium room. Vines can also generate on dying oak, spruce, jungle and dark oak trees.‌[Bedrock Edition only] Vines can generate in watchtower walls in pillager outposts.

Vines can be destroyed with anything, but using shears is the only way to collect them. Efficiency on shears does not work for vines.[1] The mining speed can be increased with an axe, but an axe cannot collect vines even with Silk Touch. If multiple vines exist within the same block space, breaking one of them breaks all of them instead of just the one targeted[2] and results in only a single vine dropping.[3]

Vines are sold by wandering traders for an emerald.

On each block tick, the vine block has a 25% chance of attempting to spread in a randomly selected direction. Vines spread to adjacent blocks under certain conditions:

Vines can be placed on the side of any block that fills its whole cube and blocks entity movement. They can also be placed on the bottom side of a block. However, a vine block without vines on any of the horizontal sides disappears if it gets an update from a neighboring block. Vines attached to the bottom of stairs are completely deleted by any block update.[4]

Several vines can be placed in the same block space, as long as they are facing different directions.

Vines block mobs' line of sight, so it is possible to sneak up onto mobs by hiding behind vines. Because of this, endermen can safely be viewed through vines and skeletons do not attempt to shoot targets behind vines.

Vines can be climbed by standing next to them and holding the jump key. If there is a solid block behind the vines, the walk forward key can also be used. Vines are intentionally designed as to be completely silent when being climbed,[5][until JE 1.16] in contrast to ladders and scaffolding.

Vines cancel a sprint if the player is sprinting, slowing the movement speed.

Vines absorb all fall damage, even without a solid surface nearby. Sneaking on vines causes the player to hang, even if the vines are not adjacent to any surface.

Blocks can replace vines if placed within the same block space. However, item frames and paintings cannot.[6]

Placing vines into a composter has a 50% chance of raising the compost level by 1.

In Bedrock Edition, vines uses the following data values to determine the face against which the vine is anchored. Note that (except for Top) these are testable as bit flags, unlike most of the other directional data for other block types. Multiple sides can contain vines. The "top" attachment is assumed to be present if data is 0 or there is solid block above.

Issues relating to "Vines" are maintained on the bug tracker. Report issues there.