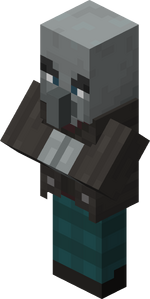 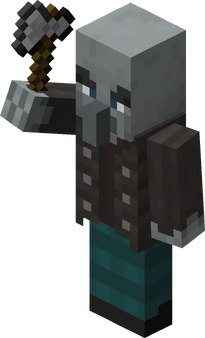 For the mob in Minecraft Dungeons, see MCD:Vindicator.

This page would benefit from the addition of isometric renders.
Please remove this notice once you've added suitable isometric renders to the article.
The specific instructions are: Vindicator Attack animation on BE.

On Normal difficulty and Hard difficulty, vindicators sometimes spawn with a randomly enchanted iron axe: the chance is 0-25%, with the chance being higher when the regional difficulty is higher.

Vindicators spawn during the generation of mansions, inside particular rooms. Some rooms contain 1, others contain 3, some contain 2 accompanied by an Evoker, and some can rarely spawn in the corridors.

They do not respawn after initially spawning. Vindicators generated with mansions do not naturally despawn (unless the world is switched to Peaceful difficulty ‌[JE only]).

Patrols consist of 2–5 Illagers, with all Illagers always being Pillagers on Easy difficulty and Normal difficulty. On Hard difficulty, 80% of them are pillagers and 20% of them are vindicators.‌[BE only]

Vindicators can spawn during raids. They appear more frequently during later waves and at higher difficulties.

Vindicators can spawn riding Ravagers.‌[JE only]

Vindicators drop loot only when killed by a player or tamed wolf. When they die, they drop :

In Bedrock Edition, if a vindicator spawns as part of a raid, it drops: 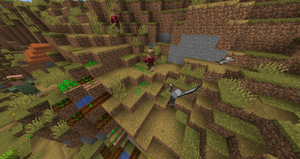 A vindicator chasing a Villager.

A mob hitting a vindicator would provoke not only that vindicator, but also all vindicators around, similar to piglins or zombified piglins.

During raids, vindicators can open doors, just as villagers do.‌[JE only] They break wooden doors on Normal and Hard difficulties when attacking.

A vindicator disables the player's shield with its iron axe attack, even when riding a mob.‌[JE only] For this reason, a player may not survive trying to land a melee attack on a vindicator that rides a ravager during a raid in Hard difficulty.

Like shulkers, and evokers, vindicators are passive in Peaceful difficulty. ‌[Bedrock Edition only]

Like most hostile mobs, vindicators despawn in Peaceful difficulty in Java Edition.

A vindicator named Johnny (using a name tag, named spawn egg, etc., or has its Johnny tag set to 1b) is hostile to every mob except ghasts and illagers.

The hostility even extends to Vexes and Ravagers.‌[JE only]

All hostile or neutral mobs, except for Endermites, Elder Guardians, Phantoms, Guardians, Slimes, Magma cubes and Ravagers try to attack the Johnny vindicator in return.

Naming a vindicator spawn egg "Johnny" and using it on a spawner has no effect; normal vindicators spawn rather than vindicators named Johnny.‌[BE only]

Vindicators have entity data associated with them that contains various properties.