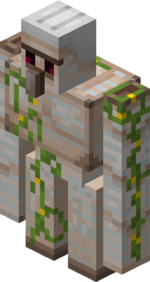 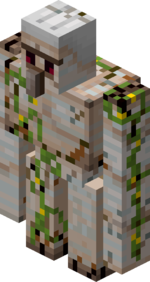 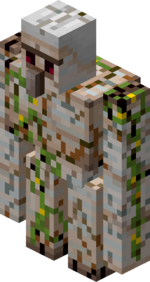 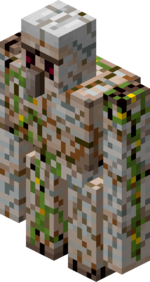 In Java Edition, an iron golem spawns based on villager gossip at a gathering point. The villager who starts the gossip must have a profession that is not nitwit, slept in the last 24000 ticks, been to their job site block in the last 36000 ticks, gossiped 5 times about the need for an iron golem, and have three other villagers within 80 blocks. The iron golem then has a chance to spawn in a 16×13×16 cuboid area centered above and below the location of the villager who spread the gossip. Iron golems can spawn inside transparent blocks, stairs, carpets and half-slabs as long as there is a full block underneath them. Iron golems require at least a 1×3×1 space to spawn, even if their spawning results in their own suffocation and death. Iron golems are able to spawn in water. Additionally, when three different villagers see the same zombie during a span of 10 seconds, an iron golem will likely spawn,[more information needed] as long as those villagers meet the above requirements for gossip-based spawning.

In Bedrock Edition, an iron golem can spawn naturally when a village first generates in the world. Iron golems also spawn in villages having at least 21 beds and 10 villagers, in a 16×6×16 volume around the village center defined by a bed, a bell, or another meeting point. The chance of spawning is 1⁄7000 per game tick, which averages to one every 5 minutes and 50 seconds. Iron golems can spawn provided the blocks it spawns in are non-solid and the block it spawns on has a solid flat top surface.

Iron golems are created by placing four iron blocks in a T shape (as shown in the image), and then placing a carved pumpkin, a jack o'lantern or a pumpkin‌[BE only] on top of the center upper block. The pumpkin may be placed by the player, an enderman, a dispenser or a pumpkin stem, but it must be placed last. It needs space around it to be able to spawn and cannot spawn in a confined area. In Java Edition, the player must also use shears on the pumpkin to begin the transformation. 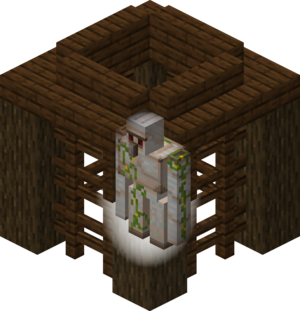 Iron golems can also be found surrounding pillager outposts, trapped inside of dark oak cages. When freed, they help the player by attacking the mobs. 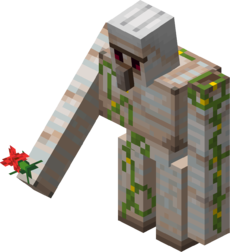 Like all utility mobs, iron golems can be leashed.

When provoked, an iron golem moves quickly toward its target and swing its arms up violently to attack, dealing 7

Iron golems attack most hostile or neutral mobs within 16 blocks of them, although they are not effective on flying mobs (ender dragon, wither, phantom) that don't venture into the iron golem's reach. Additionally, pufferfish are the only passive mob they attack should either get close to the other.

A naturally-spawned iron golem knows raiding illager locations from behind solid walls and from underground and attempts to move toward them. An iron golem created by the player or summoned by a command cannot detect raiders through obstructions.

Zombies (and variants), skeletons (and variants), spiders, cave spiders, slimes, magma cubes and illagers naturally attack iron golems on sight and may cause major damage, especially if the mobs attack in groups. If an iron golem is attacked by multiple mobs, it retaliates in the order it was attacked. In Bedrock Edition, endermites, silverfishes and witches may naturally attack it too.

Taking damage causes visible cracks to form on an iron golem's shell. These can be repaired with iron ingots.

Iron Golems have different stages of being cracked to show their health. When their health is above 74

× 37, there will be some visible cracks. When their health is between 50

In Java Edition, using an iron ingot on an iron golem restores its health by 25%.[2]

Iron golems have entity data associated with them that contain various properties of the mob.

Note: This video states the iron golem as having the second highest health. This was before the introduction of the wither, meaning they now have the third highest health. 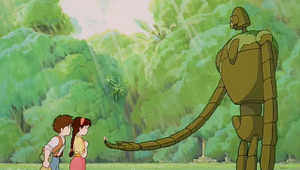