This page describes content that exists only in outdated versions of Java Edition.
This feature used to be in the game but has since been removed.
Villager

Villagers were passive mobs that inhabit villages, with different professions, breed, and interact. Their clothing varied according to their occupation. A player could trade with villagers, using emeralds as currency. They were replaced with a revamped version of themselves in the Village & Pillage update.

Villagers will breed autonomously, but need doors and need to be willing in order to spawn baby villagers. After exactly 20 minutes, the baby villager will grow up to an adult. See this section for more information.

Villagers will spawn if a player uses a splash potion of weakness on a v1 zombie villager in template world and then feeds it a regular golden apple. It will then shake and turn into a villager within 0-5 minutes. During the change, the zombie villager can still burn in the sun.

Villagers drop nothing upon death.

Upon spawning, villagers will leave their homes and begin to explore the village. Generally, they wander aimlessly inside the village during the day. They may go indoors or outdoors, and they periodically make mumbling sounds. Occasionally, two villagers may stop and turn to look at each other, in a behavior called socializing, in which they will stare at another villager for 4-5 seconds at a time. In the case of players, they will continuously stare at them as long as the player is close enough, unless the villager tries to get into a house at night, farm food, or flee from a zombie.

In Legacy Console Edition, when a player attacks a villager, the villager will not run away, but anger particles will fly out from the villager if it is in a village. In Bedrock Edition, villagers do not stop continuously in front of players. They will also sprint away if the player attacks them.

Villagers, like other mobs, will find paths around obstructions, avoiding walking off cliffs and some blocks that cause harm. However, in crowded situations it is possible for one villager to push another off a cliff or into harm. Villagers also occasionally walk off of ledges high enough to cause fall damage.

At night or during rain, villagers will run inside, closing doors behind them, and staying indoors until morning. In the morning they will head outside and resume normal behavior.

Villagers will run away from zombies, illagers and vexes within 8 blocks.

There is evidence that villagers are prone to overcrowding certain areas of a village while leaving other areas completely empty. When moving inside, the AI prefers doors within 16 blocks (Euclidean distance). It also tends to prefer doors with fewer villagers nearby, however "nearby" in this case is only 1.5 blocks and, when moving inside, villagers prefer to move 2.5 blocks inside when the inside is to the south or east and therefore will be out of range of this check. During the day, it has been observed that villagers will tend to cluster near a trapped villager or any existing large cluster of villagers, likely due to the "socialize" AI routine overriding their inclination to wander.

Villagers have eight hidden inventory slots, which start empty whenever the villager is spawned. Villagers will not intentionally seek out items to pick up, but they will collect any bread, carrots, potatoes, wheat, seeds, beetroot and beetroot seeds they happen to come within range of. These are the only items they are able to pick up, though the player may use the /replaceitem command to put an arbitrary item into a villager's inventory. If a player and a villager are in the pickup range of an item at the same time, the player will always pick it up first.

Even when gamerule keepInventory is set to false, villagers that are killed with any of the available items above will not drop them once they are killed.

If /gamerule mobGriefing is false, villagers will not pick up items.

To share, a villager finds his first inventory stack with at least 4 bread, carrots, potatoes, or beetroot or with at least 6 wheat, and then throws half the stack (rounded down) in the direction of the target villager. When wheat is shared, it is first crafted to bread which may result in 1 or 2 less than half the stack being shared.

Adult and baby brown-robed villagers, both farmers and other careers, will tend crops within the village boundary. Villagers far enough outside the boundary of any village will also tend nearby crops.

Farmland to be tended is found by seeking for certain blocks up to 15 blocks away from the villager in X and Z and up to 1 away in Y (a 31×31×3 area total).

A group of villager children playing a game of tag.

Baby villagers will sprint around, entering and leaving houses at will. They will sometimes stop sprinting to stare at an Iron Golem. If the Iron Golem is holding a poppy, the children will cautiously take the flower from its hands. They tend to group and chase one another around the village as if playing tag.

Baby Villagers in Bedrock/Legacy Console Editions have a slightly bigger head than in the Java Edition, this also can be seen in different baby mobs in the game as well.

Unlike other breed-able mobs, the parents and child have no personal interactions other than socializing.

Zombies will try to find and attack villagers within a 42 block radius (even when the villager is invisible), and will attempt to break down doors. Zombies will only successfully break doors if the difficulty is set to hard, though only a fraction of zombies spawned in hard mode have the capacity to break doors. This also applies to zombie pigmen if they path find through a door. Villagers will run away from zombies, sometimes hiding in houses. The villager's only "natural" defense are the iron golems, which attack nearby hostile mobs.

Zombies will try to kill villagers, or convert them to v1 zombie villagers. The chance that the villager will become a zombie villager on death is 0% on Easy, 50% on Normal, and 100% on Hard. Baby villagers can be infected by zombies as well.

Villagers will also run from zombie pigmen, though the latter will not attack them.

When lightning strikes within 3–4 blocks of a villager, it will turn into a witch.

Additionally, villagers must be "willing" in order to breed. After mating, they will no longer be willing, and must be made willing again.

Villagers can become willing by having either 3 bread, 12 carrots, 12 potatoes, or 12 beetroots in one stack in their inventory. Any villager with an excess of food (usually farmers) will throw food to other villagers, allowing them to pick it up and obtain enough food to become willing. The player can also throw bread, carrots, beetroots, or potatoes at the villagers themselves to encourage breeding. Villagers will consume the required food upon becoming willing.

Villagers may also become willing when the player trades with them. Willingness is granted the first time a new offer is traded, or at a one-in-five chance on subsequent trades. Most of the time, villagers becomes willing after the second or third trade. Green particles will appear if the villager becomes willing by trading. This will not cause them to immediately seek out a mate, however.

Before Java Edition 1.8, willingness was not implemented. The only factor needed is enough valid doors.

Each villager has a profession, which can be identified by their clothing. Villagers also have careers specific to their profession. The player can identify a villager's career by reading the title at the top of the trading interface.

Below is a table listing the various villagers, with their careers in relation to their professions, as well as the IDs specifying these. While each profession has a 1 in 6 chance (16.67%) of occurring, the probabilities for individual careers to occur are more diversified. They are listed in the table as well.

The Nitwit villager is a villager that wears a green robe and cannot be traded with. 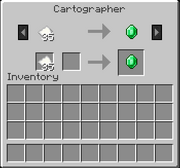 The pre-1.8 trading interface displaying a trade of 28 paper for 1 emerald.

The trading system is a gameplay mechanic that allows players to trade emeralds for items and vice-versa with villagers.Their trades can be good or bad, depending on what the cost is and what items you might get. Trading is only available for adult villagers; the player cannot trade with baby villagers or the nitwit villager.

Right-clicking a villager will allow a player to trade with them, and display their career. Villagers will make offers based on their profession and career, and will only make trades based on whatever offers they are making. Different offers may be viewed by pressing the left and right buttons next to the currently displayed offer. All offers involve emerald as a currency, and some item pertinent to the villager's profession and career. Trading allows the acquisition of rare items that would otherwise be fairly difficult to obtain, such as chain armor. The trading mechanic allows players to get bottle o' enchanting in survival mode. When villagers get a new trade, pink particles and green cross particles appear.

When a villager gives off particles from a new trade, they get 10 seconds of regeneration I, which gives them 4

Commands or external editors can help villagers get new trades.

If a villager unintentionally picks up certain seeds or crops, it will throw it to another villager to simulate trading between the villagers.

Villagers have entity data associated with them that contains various properties.

On April 1, 2014, Mojang announced that villagers have taken over the skin servers and content delivery networks (CDN) as an April Fools joke. This caused players' current skin to turn into villager skins. This also caused users to be unable to change their skins. Different career villager skins were used, including the then-unused nitwit villager (green robe).

Many of the sounds were also changed, supposedly by the villagers. They seem to be similar to a villager talking (with words, rather than their normal sounds). The in-game music has also been altered to include villager like noises, and also features a villager version of the "Game of Thrones" theme on the title screen. The sounds originate from the sound resource pack created by Element Animation, titled The Element Animation Villager Sound Resource Pack (T.E.A.V.S.R.P), which is based on the villagers appearing in their fan videos. The villagers were voiced by Dan Lloyd, Director of Element Animation.