From Minecraft Wiki
(Redirected from Village and Pillage)
Jump to: navigation, search 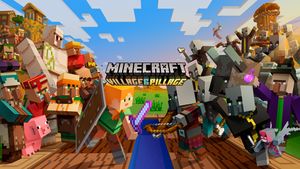 Artwork for the Village & Pillage update released by Mojang.

Additionally, features from this update were also released for Education Edition in 1.9, 1.12, and 1.14.

The official name for the update, Village and Pillage was revealed on September 29, 2018, during the MINECON Earth 2018 livestream.

For Minecraft China, the full update was released on July 4, 2019, based on Bedrock Edition 1.11.

A trailer documenting some of the Village & Pillage's features was released on Mojang's official YouTube channel on April 17, 2019, featuring a wandering trader on a journey with its trader llama. The trailer was made by Mojang themselves instead of Hat Films, similar to the 3 previous trailers.

A trailer for the update was released on April 23, 2019. Similarly, this trailer was made by Mojang themselves instead of Hat Films, similar to the 3 previous trailers.

Note: The footage from both videos are taken from the Java Edition.