I think we edited around the same time[edit]

All good, made sure not to remove any information. I had already included the "CanPlaceOn" tag, and moved your "HideFlags" over to the "Other" section, since these tags need to fall under the "tag" tag. Skylinerw (talk) 17:04, 6 February 2014 (UTC)

Probably more globally recognizable reverted, but not fair to label that edit as vandalism. –Preceding unsigned comment was added by GufNZ (talk • contribs) at 21:40, 13 February 2014 (UTC). Please sign your posts with ~~~~

Alright, wasn't sure if it was some Youtuber reference material, such as "budder". Thanks for the clarification. Skylinerw (talk) 01:50, 14 February 2014 (UTC)

I've tested every single block with every data value, and the ones listed plus webs are the only ones that render in a flower pot. I don't know how you are getting iron bars, wool, or beacons to render. Am I missing a tag or something?

I see where the issue is now; the chunk format page is updated to the latest snapshots when available (currently 14w11b), in which the "Item" tag is a string-type and a large number of blocks render when used in the tag. They won't appear as they normally would in-game, but rather like a cross. Here's an image example: http://i.imgur.com/oOtTsE0.png (note that the cobweb follows the pattern instead of being scaled)

And while a large number of blocks do render, there are still some that don't, such as cauldrons, brewing stands, redstone, comparators/repeaters, and doors. So since there's a huge number of blocks that do render, the list of valid blocks instead contains those values that would refer to blocks that can be placed within the flower pot in-game. Some of them require specific "Data" tag values, such as "tallgrass", but then each of the other valid IDs would need their corresponding "Data" values listed. Might be worth removing the list entirely and pointing folks to the flower pot page instead.

Currently an overhaul is in the works on the whole metadata concept, which would be its replacement with "block states". So instead, all blocks will have item IDs instead of Damage values (so something like minecraft:wool_red instead of minecraft:wool with a Damage value of 14). Unfortunately there's no known time when this will be completed, but would fix the issue about listing every single "Data" value (unless, of course, the list is removed and people are redirected to the flower pot page).

Take a look at the picture, as you can see my cursor is pointing in the middle of four blocks when I am at x+0, z+0 looking straight down. 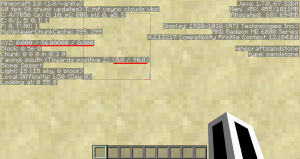 I suppose it's a matter of semantics. Players do not respawn on corners, but at the center of blocks. An image showing the world spawn being a corner could be misleading in that sense, especially when the focus of respawning is, of course, player location. Skylinerw (talk) 16:58, 7 October 2014 (UTC)

About people not reading notes[edit]

Sometimes it's because they used VisualEditor for an edit, and couldn't see the note. Lest you think there are tons of people intentionally ignoring notes : ) – Sealbudsman talk/contr 13:31, 11 October 2015 (UTC)

I play Minecraft Windows 10 Edition and I see it in the creative inventory. Here is a picture to prove it. 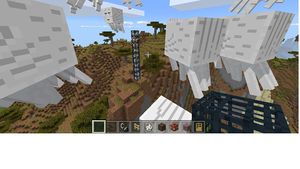 The edit you made had deleted correct information (which is unrelated to spawn eggs, so please clarify why you are mentioning them). The creative inventory in Minecraft PC does not include mob spawners. It's not stating they cannot be obtained in the inventory (which is stated as possible in the same paragraph), but instead stating they are unavailable in the "creative inventory" screen, which is correct. Skylinerw (talk) 20:03, 14 November 2015 (UTC)

MC.net/community can't be referred to for 3 reasons: 1 - minecraft.net is an outdated rescource that is no longer updated and hasn't been since 2 years ago. 2 - many of the sites that the /community page mentioned are either closed or unused. 3 - MOJANG.com is the official website for minecraft with updates and information. MOJANG.com does NOT refer to minecraftforum.net as being an official forum or resource for minecraft.

Other LEGAL factors causeing your claim that MCF is official to be false.... 1- CURSE.com (who owns MCF) is not owned operated or maintained by Microsoft or mojang. 2- Income from your site DO NOT go to support or maintain the minecraft game. They go to support a few of your staff and curse.com employees. 3- Everything posted on MCF in the news section are DIRECT REPOSTS from information on the MOJANG.com site. 4- News and information is not maintained by ANYONE connected to mojang or Microsoft.

The fact that you site an old website that is no longer maintained or updated does not give you right to claim being official. The MC wikia is also unofficial since it is not maintained by any Microsoft employees or mojang employees. (as far as we are aware.) Notch sited these locations as being official rescources a very long time ago before he sold his game to Microsoft. But, they stopped maintaining or updating the minecraft.net website about 6 months before the moved over to there new website mojang.com

But, MCF and MCwikia are the largest and most active for the minecraft game.

I have nothing against MCF. I come here often. But, my concern is that Microsoft or mojang may decide to sue over these false claims. It would be better to boast that MCF is the LARGEST forum for minecraft. Cause this is true. but official? Sorry. No.--Hooptiecoupe (talk) 18:09, 1 February 2016 (UTC)--Hooptiecoupe (talk) 18:17, 1 February 2016 (UTC)

My thoughts ... if Microsoft were of a mind to go into some kind of legal battle with Curse over this kind of language, a) that would be uselessly destroying a good relationship with the provider of their official wiki, and b) it would be utterly without warning, because I'm sure they are aware that all the various places on the web (mc.net/community, the meta search description on MCF which says "official community forums", etc.) still state that MCF is official, that a wiki would simply cite what the web says, and that if they would just update everything to reflect that, the wiki would soon be edited to match. If something has changed that they would be so legally concerned about, the ball would really be in their court to communicate the change. – Sealbudsman talk/contr 19:10, 1 February 2016 (UTC)

minecraft.net is still the official Minecraft site, regardless of how often it's updated; http://www.mojang.com/games/ links to it. They also link to the forum at https://help.mojang.com/customer/en/portal/articles/1175661-minecraft-support-resources . Without any comment from Mojang on this, I don't think 'it hasn't been updated in a while' is a sufficient reason to no longer consider something an official resource. -- Orthotopetalk 19:24, 1 February 2016 (UTC)

Please understand that these are not my claims as the line & reference has existed for a very long time, since 2011. Your edit contradicted the line on the sourced official Minecraft website and was thus reverted; standard cleanup. Regardless, minecraft.net is owned by Mojang. If the details on that page are outdated, can you provide an up-to-date link to mojang.com where it states the opposite or makes clear whether or not the forums are an "official" resource, or perhaps a word from a Mojangster, or some form of official word? Do you have a source that the site has not been maintained for 6 months? Saying a reference is outdated but not providing an updated source does not help resolve the quotation.

Also keep in mind that the word "official" does not mean "owned by". A game company could have a third-party service create a guidebook and call it their official guidebook, even though they do not own the service who published the guidebook (examples here, not to mention countless other examples where an official strategy guide is involved).

If the page is full of other questionable sources (referring to your comment on my user profile), you should take it to that page's Talk page. I am not that page's personal caretaker. Skylinerw (talk) 19:35, 1 February 2016 (UTC)

I assumed you must have been the contributer or editor for that page since you edited my edit pretty quick :) thanks for the info. I'll add the notes there because several the links don't apper to line up with the cited comment. on why there using that link? they apper to just be spammed links. Hooptiecoupe (talk) 20:30, 6 March 2016 (UTC)

Wanted to make a quick apology[edit]

Hi, made that edit on the horses page about skeleton horses and taming, didn't properly process what was said in the relevant area until you pointed it out, sorry about that ^^; ~HLL

While I did create the entitydata pages, the base pages are still a redirect to 1.11. That shouldn't be, and I don't have any more time to fix it today. I'm volunteering you to find someone to do it! :P Firebastard (talk) 21:08, 28 September 2016 (UTC)

Opinion-based commentary. The section in question is still factual despite there being volume selection, and its usefulness is an opinion. The current implementation of volume selection causes an immense amount work for the server, while using a radius may be more efficient depending on the values used. My apologies for not making the revert clear. Skylinerw (talk) 15:35, 19 October 2016 (UTC)