In general, articles about redstone components should simply document the block itself, not list all the possible circuits and structures which can be built from it (there could be thousands). For that we have Tutorials and the redstone circuit articles. 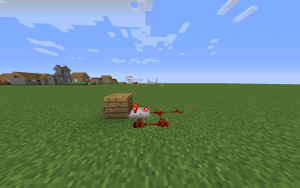 Additionally, when you take a picture of a circuit, it's helpful to indicate where the output should be (see the redstone style guide). This picture (right) implies to me that you should take your output from the dust on the right (otherwise, why is it there?). However, it's too short -- that dust will never turn off but only toggle between power level 14 and 1. The only place you can get an on/off signal from this clock as pictured is from the dust on the side of the comparator.

Hey, I noticed you have recently been creating pages for the mod [[Mods/Ex Nihilo|Ex Nihilo]]. In the past, we had pages about that mod, but we recently moved them to the Official Feed the Beast wiki, as it did not make sense to have two gamepedia wikis cover the same content. While there currently is no rule against recreating the pages here, I would personally advise contributing to the related pages on the Feed the Beast wiki instead, as that will keep all the information in one place. –KnightMiner t/c 22:58, 10 May 2015 (UTC)