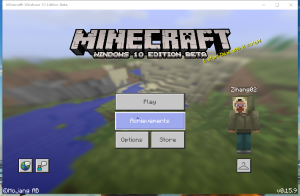 Can I ask, what do people who don't have PE on certain platforms usually check, to know that a certain version is 'released' on that platform? I have PE on Win 10 and android, but I don't have it on iOS, Fire OS or Windows Phone for instance. I've been checking the Android, iOS, FireOS, Windows 10, and Windows Phone store webpages. Is this a good source, if we personally don't have the game to refer to? – Sealbudsman talk/contr 15:33, 23 September 2016 (UTC)

Apologies for not replying eariler, but I usually prefer to check the respective stores to see if they are available or not. In some cases, the stores usually update the version number some hours after that update has been released. -BDJP (t|c) 10:20, 28 September 2016 (UTC)

Treating things as 'hoax' or 'unlikely'[edit]

If you haven't got a pocket edition to check, and you think some PE-related edit is a hoax or unlikely, maybe instead of reverting and deleting the edits, maybe check around with some PE players either here (I'm a PE player, you can always ping me) or in the community to verify. Usually in these cases, the edit is correct. – Sealbudsman talk/contr 14:37, 8 October 2016 (UTC)

Well I found some sources that tomcc said he would change the world build height, and change the levelchunk format.--Wyatt2050 (talk) 10:16, 2 November 2016 (UTC)

Yeah, my mind wasn't in the right place, so I took a break for a little while. All I have to do now is just whip up the plot for Episode 8 of MC:SM, plus add TU45 to the CE version history, check the sizes of everything, etc. etc. As for my YouTube channel, let me just say this: *Insert name of movie / tv show / song here* but *insert something weird that will happen to the movie / tv show / song here*. -BDJP (t|c) 20:55, 3 December 2016 (UTC)

Sealbudsman, Majr, Geg2004, sorry for interrupting Christmas, but what I'm specifically asking for is a screenshot in-game of PE on Windows Phone showing the version number. I knew I should've mentioned this earlier, but my mind didn't think of it until this morning. -BDJP (t|c) 18:21, 25 December 2016 (UTC)

The store already says the version, and I can confirm that the store is correct. Do people really need to provide image proof before you'll accept what everyone is saying is true? –Majr ᐸ Talk
Contribs 00:17, 26 December 2016 (UTC)

Mentioning "android emulator" clearly draws a red flag. Is there a reliable source for the photo, such as the feedback website or the pocketbeta website? -BDJP (t|c) 20:17, 15 February 2017 (UTC)

While the term "emulator" may have a negative connotation, due to SNES emulators and other such questionable things, Android emulators are entirely legitimate, and part of a typical app development environment.
At the same time, the image isn't an official one (a screenshot by a wiki editor never is), and so doesn't belong in the info box ... – Sealbudsman talk/contr 01:34, 16 February 2017 (UTC)

Thanks for the clarification about putting images in the infobox, I'll go request that image for deletion.--SamGamgee55 (talk) 05:01, 16 February 2017 (UTC)

Hello. I'm really sorry for making a noise while the other day.

On Classic's version history article, there is no changelog entry for c0.30_01c, but there is one for c0.30_01. I can't find a proper source for my claim that the C version was a modded version, however you'll notice that any JARs of the C version you find will have their META-INF folder missing (or modified).

Regarding this revert: https://minecraft.gamepedia.com/index.php?title=User:Sonicwave32&diff=next&oldid=1090908 The user is having an issue when he edits his user page and it logs him out. We have a known issue with the Special:RecentChanges transclusion. He asked for help and I put in a workaround for him. Please do not revert this edit again. --Alianin (talk) 15:37, 1 May 2017 (UTC)

I have that issue too! How do you fix it?  Nixinova  T  C

Hi there. I made the change to this specific cell, and the proper talk page for that would have been Talk:Console Edition version history. I did it that way because Nintendo Switch's Patch 3 also includes the versions from the other Editions, specifically Wii U Edition Patches 18 to 21. Each edition column is of course still sorted by date and time in itself. | violine1101(Talk) 07:55, 31 May 2017 (UTC)

It will display the correct sprites once the image cache clears and the current image version is available. For now it was just showing yesterday's image. – Sealbudsman talk/contr 20:57, 23 June 2017 (UTC)

Please note that Console updates are released later in North America than in Europe – I use 4JStudio's twitter feed as the only source; they've stated the update will be released as soon as possible. The information will be re-added in a few hours anyway, so your removal seems to be a bit fussy to me. | violine1101(Talk) 15:45, 29 June 2017 (UTC)

Yet the 4JStudios Twitter does not. Tweet regarding the bug fix update, and then the tweet regarding the update being rolled out for PS4 (while other platforms are in testing) two hours later. -BDJP (t|c) 19:15, 29 June 2017 (UTC)

Why did you removed that part?[edit]

Hey man why did you removed that part? Is it because its a little off topic? I just did that to let players know that a removed feature of MCPE has appeared in Minecraft Story Mode Season 2. Nickfamztwitch (talk) 06:27, 2 July 2017 (UTC)

Why did you remove the notes I left for these four files? They are needed. Changing the aspect ratio of a single file results in some ugly gaps between the images. Why would you want that? Fusseel (talk) 18:01, 8 July 2017 (UTC)

I only added them, because someone uploaded a new image with a different aspect ratio which resulted in those ugly gaps on the biome page. That clearly shows that a note is needed. And I really doubt that people are going to check every page a file is used on before uploading a new version so that they could figure out by themselves which aspect ratio is needed. Putting such a note on each talk page is pointless. No one checks there before uploading a new version. And where exactly can I read up on that rule prohibiting me from adding such a note directly to the main page of a file? Fusseel (talk) 18:30, 8 July 2017 (UTC)

While there is no rule regarding notes, some editors tend to also follow rules from Wikipedia (for example, WP:IUP#NAME which states that the description should basically describe what it is, not how it should be used). -BDJP (t|c) 18:51, 8 July 2017 (UTC)

We use the file pages as a dumping ground for categories and licenses. We don't have any style guide for them, nor do we routinely use any templates for describing all the details of a file (like the barely used {{information}}, which I would be fine with getting rid of entirely). Put whatever the hell you like there, if you ask me, I doubt anyone cares about them. –Majr ᐸ Talk
Contribs 02:02, 9 July 2017 (UTC)