Passive mobs are usually the first mobs to be encountered in a new Minecraft world. They are harmless creatures, and will not attack the player or run away, even when attacked. With the exception of the Squid, they spawn in grassy, well-lit areas. There are four land-based passive mobs: Chickens, Cows, Sheep and Pigs. Spiders will become passive in sunlight if they are not already targeting the player, but they are not a "true" passive mob. The only water-based mob currently is the passive Squid, while the only air-based mob(flying and/or floating and/or levitating) is the agressive Ghast

The movement of passive mobs is entirely random. They will move for a short while in a random direction, pause for a while and look around, then move again, sometimes changing direction as they walk. They will often stare at the player if he/she is nearby. If they run up against a ledge or wall, they will automatically begin jumping in an effort to climb the ledge. This results in some strange behavior in tight spaces.

If a mob comes to the edge of a cliff which is tall enough to cause fall damage, it will generally stop at the edge, though this does not always seem to be the case. If a land mob falls into water, it will begin jumping to automatically swim to the surface and remain there, continuing to randomly move about as it jumps until it eventually reaches land again.

It is a popular belief that farm animals are attracted towards light. This is false; there is nothing in the mob AI code to cause such an attraction. Rather, the apparent attraction to light is an illusion caused by animals spawning only on torchlit grass at night, resulting in animals clustering in the lit areas.

Chickens are passive mobs that first appeared in Alpha mode. The main purpose of chickens is to supply feathers and eggs, essential for arrows and cakes respectively. Chickens are 0.875 blocks tall, 0.5 blocks wide and 0.8125 blocks long. They occasionally lay Chicken Eggs which you can throw at enemies or use as an ingredient in cakes. Since the Beta 1.0 update on December 20, Chickens have a 1/8 chance of being spawned from a thrown Egg. 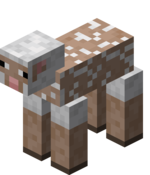 Sheep are passive mobs that first appeared in Survival Test mode. The main purpose of sheep is to supply wool; a block used for crafting and decoration. Sheep are 1.25 blocks tall, 0.625 blocks wide and 1.4375 blocks long.

Sheep naturally come in a small variety of colors. White sheep are most common, followed by gray, black and light gray. Hitting a sheep will yield the appropriate color of wool. Sheep can also be dyed any color by the player, which changes the color of the sheep's wool, and hence the color of wool acquired when the sheep is hit. Differently colored sheep act exactly the same as their white counterparts.

Sheep do not drop wool if they are damaged by cacti, lava, drowning or falling; only by being hit, with the exception of the being hit with a non-damaging snowball, egg or a fishing rod's hook. This means that it is not possible to collect wool blocks using a mob grinder trap. (However, wool can be crafted from string dropped by spiders.)

Pigs are passive mobs that first appeared in Survival Test mode. The main purpose of pigs is to supply pork, and therefore are a renewable source of food. Pigs are 1.1875 blocks tall, 0.625 blocks wide and 1.25 blocks long. 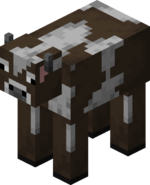 Cows are passive mobs that first appeared in indev. Their main value is as a source of leather which can be used to make the lowest tier armor. They are 1.6875 blocks tall, 0.625 blocks wide and 1.5 blocks long. 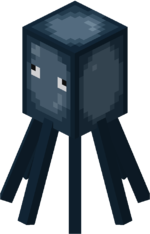 Squid are the first water mobs in Minecraft. They are 8-armed passive mobs introduced in the Beta 1.2 update. Squid are found in water of any depth in any location. When forced onto land, squid become immobile. There, they take fall damage and burn like any land mob.