Brewing "grid" (Ingredients are placed at the top. Bottles placed underneath)

Brewing, in Minecraft, is the process of creating potions and splash potions by mixing various ingredients into water bottles with a brewing stand. 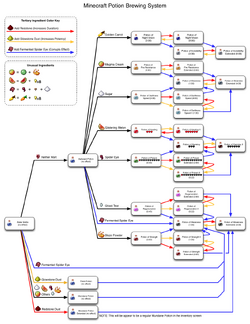 By placing bottles in the lower three slots of the brewing interface and an ingredient in the upper slot, you can distill the ingredient into the bottles and brew potions which may be consumed to grant an effect to the player.

Every potion starts with a water bottle, made by filling a glass bottle at a water source or a filled cauldron. The next step is to add a primary ingredient to create a base potion, which is usually Nether Wart, to create an Awkward Potion which has no effect. By brewing a second ingredient into a base potion in the same manner, you can create a potion with a working effect. A third ingredient may be added to make the effect more potent or longer lasting, or turn the effect harmful. Gunpowder can be added to a potion at any stage to convert it to a splash potion, which can be thrown to disperse its effect in a radius. Each brewing step takes 20 seconds.

Brewing can create very useful and lifesaving potions. A good number of them are useful in combat by aiding the player or weakening opponents while others can save the player's life if used quickly, such as Fire Resistance and Healing. Gathering Blaze Rods and Nether Wart can prove challenging, but once set up, most potion ingredients are fairly plentiful and brewing will be a rewarding task.

Base ingredients are the starting point of all potions. Nether Wart is the primary ingredient added to water bottles at this stage, as it is required to make most of the potions. All other base ingredients will only allow the creation of variations of Potion of Weakness.

Secondary ingredients imbue an Awkward Potion with a particular effect but do not alter potion duration or intensity. When added directly to a water bottle, any of these ingredients will produce a Mundane Potion (with the exception of fermented spider eye, which results in a Potion of Weakness).

Modifiers change the potion's properties. The "longer duration" and "more potent" versions of a potion can be forever interchanged.

Corrupting Effect: Fermented Spider Eyes will change a potion's base effect, often reversing it or producing a negative potion.

All primary potions are created by brewing a single ingredient with a water bottle. Mundane Potions and Potions of Weakness (along with their variants) can be combined with gunpowder to create their throwable (splash potion) counterparts.

Secondary potions are created by brewing an ingredient with a primary potion and can be combined with gunpowder to create their throwable splash potion counterparts.

Tertiary potions are created by brewing an ingredient with a secondary potion or another tertiary potion and can be combined with gunpowder to create their throwable splash potion counterparts.

The first method involves adding glowstone (typically) to an already upgraded tertiary potion (seen in Section 5.3.1 or 5.3.2 above). Since these tertiary potions have already been modified with redstone (typically), they can change to their original (revert) unmodified states depending on which modifier was added previously. Not all potions will revert (or react, for that matter) when glowstone powder or redstone dust is added to an upgraded tertiary potion (for example, adding redstone to an already redstone-extended potion will not yield a new potion).

The second method involves the addition of fermented spider eyes, followed by glowstone (usually). Method two works by adding fermented spider eye to an extended positive potion (i.e. an extended tertiary potion). In almost all cases, this will corrupt the potion (corruption is described in Section 4.3 above) and produce a negative potion of equal strength (in this case, extended). Then, glowstone (depending on the recipe) is added to the extended negative potion. Since these negative tertiary potions (regardless of origin) have already been modified with redstone, the addition of glowstone will revert the potion to a potion of lesser duration.

Now, there should be two Potions of Weakness (4:00). Glowstone dust is added to the Potion of Weakness (Ext) which reverts the potion into a normal duration (1:30) Potion of Weakness. The act of reducing the duration from 4:00 to 1:30 is reversion. In the inventory, reverted potions will look identical to their base potion, much like mundane and mundane (extended). Their usage is also identical to their base potions, with the exception of turning into reverted potions rather than base potions.

The following are the most efficient recipes to brew each potion. If two ingredients may be brewed in any order relative to each other, they are separated by a double arrow (↔).

Initially, the cauldron was where potions were brewed. Code in Beta 1.9 pre2 revealed that potions were brewed by adding water to the cauldron followed by certain ingredients. Correctly combined ingredients would confer purely beneficial potion effects, and incorrect combinations added negative effects. The system was complicated, lacked a GUI, and formed many duplicate potions (i.e. two potions that were exactly the same could be made in several different ways), so Notch and Jeb came up with a new brewing method using a brewing stand.[1] Brewing was greatly streamlined and simplified when a brewing GUI was added and most duplicate potions were removed (the total possible potions went down from 150 combinations to only 25 different potions in 31 combinations). However, this new system made some potion effects available in earlier 1.9 pre-releases inaccessible (e.g. Nausea, Blindness and Invisibility).

Throwable splash potions were introduced in Beta 1.9 Pre4 and brewed by placing gunpowder and any potion together in a brewing stand. This pre-release also introduced Glistering Melon as an ingredient to replace the instant health effect conferred by the Ghast Tear, which then added the effect of regeneration instead. This version also converted certain ingredients into base-secondary ingredients (the Spider Eye, Glistering Melon and Blaze Powder made Mundane Potion when brewed into a water bottle in addition to their previous functions), bringing the potion total to 28 different potions in 35 combinations.

In Minecraft 1.1, the time to brew potions was decreased to 20 seconds.

Some potions also do not have a real name in minecraft (i.e. Potion of potion.healthBoost.postFix) and are currently not accessible