From Minecraft Wiki
Jump to: navigation, search
This article is about the light-emitting torch underwater. For the traditional torch that emits light above water, see Torch. For the blocks that generate naturally underwater, see Sea Pickle.

This feature is exclusive to Bedrock Edition and Education Edition.
Underwater Torch 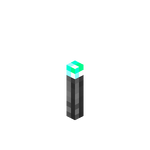 Like normal torches, an underwater torch breaks instantly and drops itself when broken using anything. The tool does not take any damage when breaking the underwater torch.

Underwater torches are also broken if pushed by a piston.

Underwater torches can be placed on the top or the sides of most solid blocks, although some require sneaking (see placement for exceptions). Being non-solid, underwater torches have no collision box.

Gravity-affected blocks like sand and gravel does not fall if the block below them has an underwater torch on it, and break if they fall onto an underwater torch. This torch is only in bedrock edition and education edition. It can sometimes be mistaken for a soul torch.

In general, underwater torches can be placed only on solid, opaque, and full blocks; exceptions are listed below.

Issues relating to "Underwater Torch" are maintained on the bug tracker. Report issues there.