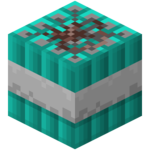 Underwater TNT is a block that can be used by the player to initiate a controlled explosion underwater.

Underwater TNT blocks can be activated the same way as a normal TNT block.

Once activated, it explodes like a normal TNT block. However, unlike the traditional TNT block, it can damage blocks underwater. It can still explode in the air, although it does not work in lava.

Issues relating to "Underwater TNT" are maintained on the bug tracker. Report issues there.