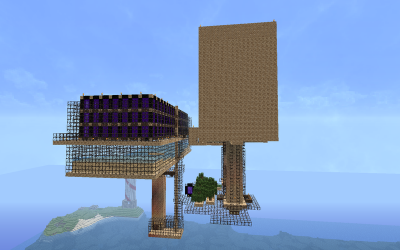 A zombified piglin farm attached to a mob grinder.

Zombified piglin farming is a method of obtaining gold nuggets and rotten flesh renewably by using spawn platforms or nether portals to spawn zombified piglins and moving them to a killing zone.

To construct a farm in the Nether, one can build platforms for zombified piglins to spawn on, with trapdoors on the edge, and place slabs on the floors of all surrounding areas (or just fill them in), so zombified piglins only spawn on those platforms.

If the player wants to take this to the next level, they can get to the top of the Nether ceiling and build this farm:

Or, a player can make a quick, and more work intensive, farm by creating a safe, walled off, area for the player. Then small windows with a half block gap be added to the walls. By attacking the zombified piglins, they will try to attack the player, but the player will instead be able to kill them safely from inside the enclosure.

For a farm that works for all versions of minecraft-

A survival friendly, high efficiency (160 gold blocks per hour) farm can also be built. The design is created by ilmango.

Since update 1.13, the zombified piglins aggro mechanics, as well as their player-tracing code, has been slightly modified. Ilmango provided a video showing the fix necessary for the farm to continue functioning.

Another strategy is to place cactus in the nether, and then stand on a block on top of it. Shoot ranged weapons at the pigmen to anger them, and they converge on the cactus, which helps to kill them.

To build a farm in the Overworld, one can construct a rectangular prism of interlocking nether portals (to save obsidian) and put open trapdoors on the edges of the two bottom Obsidian blocks so that the zombified piglins walk off. From here, one can use water to collect them into a fall or suffocation trap. Snow golems are a nice alternative.

Since the availability of larger portals, it is no longer necessary to make a prism of portals as large portals can do as well. However, the same practice can still be used to make a hyper-efficient farm by building portals in a ring (one open to each cardinal direction) from a largest outer size to decreasing inner sizes, with per space efficiency of 82.8% achievable (out of a 23x23x23 cube with 10,080 portal blocks, using 1,800 obsidian). Walling off the outer side of the largest portals and placing trapdoors on the edge of the smallest inner portals will allow the pigmen to spawn and wander into the drop or push each other into it. If a collector and crusher is placed directly beneath this point, the zombified piglins inside the farm will become angered and will track the player after the player has attacked one of them. This can be used to draw many of the piglins out of the farm into the crusher at will.

One problem with Overworld gold farms is that it is occasionally possible for angered piglins to return to the Nether through a portal. If precautions are not taken in the form of extra portals leading to a containment area, the player may be ambushed by one or more angry zombified piglins when they return to the Nether though a nearby portal. Similarly, one must be careful not to use a portal in the Nether which takes them into the farm for the same reason. This can be minimized by use of turtle eggs to lure the zombified piglins out of the portals. This ensures they will move and fall even without players nearby.

Using a fall trap has the benefit of automation, but with a suffocation trap, one is able to use pistons to control the amount of damage to the Pigmen. This way, one can obtain experience and rare drops by finishing off the zombified piglins manually, perhaps with a Looting enchantment.

A different way to spawn zombified piglins is to have a pig struck by lightning meaning a trident enchanted with Channeling can be used in combination with pig breeders for an overworld gold farm that requires no obsidian such as the design in this video:

It is also possible to make a fully automatic farm using a more advanced setup.

Since many of the zombified piglin farms produce a significant amount of golden swords, which may quickly clog up a player's storage system, an item filtering system can be used to filter out the rotten flesh, gold nuggets, and gold ingots. A redstone clock can be installed to a dispenser, and if hooked up correctly, the item filtering system can be used to spit the swords into a furnace which can then be smelted into golden nuggets.

Impulsesv shows his simple item filtering design at 8.15 in Hermitcraft 6.