Drowned farming is a way to harvest experience orbs and loot dropped by both zombie and drowned mobs. In addition to explaining general mechanics of drowned farming, this tutorial describes a basic drowned/zombie farm that is easy to construct in survival mode. In all editions, this farm produces the usual rotten flesh, gold, armor, and weapons dropped by zombies, as well as experience orbs. In Bedrock Edition the farm also produces tridents and nautilus shells dropped by drowned.

There are two main ways to farm drowned, depending on the Edition and which drops you desire most. In most cases, it's a good idea to kill the drowned manually to obtain the more valuable loot.

The detailed instructions in this tutorial explain how to use a flooded dungeon that converts zombies to drowned. This is the easiest method to implement in survival mode.

A flooded dungeon works by spawning zombies naturally from the monster spawner in the dungeon. The zombies are funneled into an underwater chamber where they drown. Once converted to drowned, the player can manually kill them for their loot and experience.

An underwater farm is the only known way to farm tridents in Java Edition. Drowned farms in a body of water are more complicated because they function similar to a dry-land mob farm.

In an underwater farm, naturally-spawned drowned are attracted to a location and funneled into one area where the player can kill them. A villager is typically used as bait to attract drowned, and the funneling can be accomplished with bubble columns. Transporting a villager to an undersea room in survival mode is a complex undertaking that requires much forethought, preparation, implementation time, and risk.

Instead of a villager, a turtle egg might also work as bait, although this is less reliable because drowned don't detect eggs as they do villagers; they must first happen to look in the egg's direction, then have a clear path to the egg, and the egg must have sufficient space above to allow trampling on it.

The simplest way to start a survival-mode drowned and zombie farm is to locate a dungeon room that contains a zombie mob spawner. Ideally the room should be reasonably close to the overworld surface, but can be any depth that allows for digging 5 blocks or so underneath the floor. Sometimes a dungeon is found a short distance inside a cave entrance. Unlike an XP farm that generally requires a long falling distance from the dungeon to bring the mobs to near death, no deep excavation is required for a drowned farm.

To construct a survival-mode drowned farm, you need a conveniently located dungeon with a zombie monster spawner, as well as a good weapon to clear out the dungeon, a cheap weapon to harvest drowned, torches, pickaxes, a water bucket, and a few signs. Optionally, glass blocks are helpful for viewing when a zombie becomes drowned. Hoppers and a couple of chests also aid collection but are not necessary.

For convenience, it is nice to have nearby (outside the dungeon room), a source of water to scoop with the bucket, gates or doors to keep mobs from wandering into your cave while you work, and a home base or temporary base with your bed, crafting table, and other helpful items a short walk away.

Side view of a drowned farm. It can be made with a single hopper but works better with more, so the mobs spread out for easier targeting. The lower-level water is surrounded by glass blocks with slabs attached to the bottoms to prevent baby zombies from escaping. Signs are visible behind the slabs, holding up the water. The hole next to the chest allows for easy disposal of unwanted items, which despawn a few minutes after being thrown into the hole.

The illustration on the right shows a side view of a basic survival-mode drowned farm, showing the dungeon above and the trap / collection room below.

Upon locating a dungeon and breaking into it:

Take note of the coordinate location of the center block along the wall with your opening. This floor block is in line with the mob spawner. In the last step, you flood the dungeon with water and dig a hole in this location for the mobs to fall through.

After preparation, exit through your opening. Don't close it off yet.

Next, underneath the dungeon, excavate the trap room. The room should be large enough to move around in, and contain the trap described below.

At the most basic level, the trap consists of a single water block that the zombie falls through from above, landing on a block (or a hopper) so the zombie's head remains in the water and drowns it. A sign on the wall holds up the bottom of the water block, and solid blocks enclose the water on all sides. The enclosing blocks may be glass to aid your identification of drowned zombies versus non-drowned zombies.

With a one-water-block trap, zombies just crowd into that one-block space, making it difficult to target the drowned zombies with your weapon. Allow the zombies to spread out as they drown by extending the trap to multiple blocks. In practice, a trap using a two-block water channel held up with two signs, with two landing blocks (or hoppers) below the channel, works sufficiently well. The illustration shows a design using a three-block water channel, three signs, and three hoppers.

Finally, go back into the dungeon above. 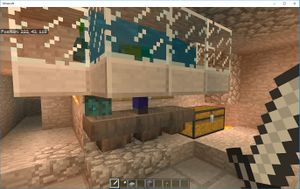 Operational drowned farm as described above, showing a drowned and a zombie not yet drowned. The recessed area in the floor with stone slabs gives the player a better vantage point for whacking at the legs.

Go down into your collection room. As zombies fall into the water-trap channel, they wander back and forth across the tops of the hoppers with their heads in the water channel. After 30 seconds of having its head submerged, a zombie starts to drown, quivering visibly for 15 seconds, and then changes color. Its pants turn from blue to greenish. Its eyes, visible through the glass blocks, also change to a blue glow.

The legs of the mobs are exposed to you. With your cheap weapon, or even bare hands, whack at the legs of a drowned. Four hits with a stone sword can kill it. Experience orbs float toward you, and the drowned's possessions drop into the hoppers and end up in the chest (or if you didn't use hoppers, the drops come to you if you get close enough). Eventually tridents and nautilus shells‌[Bedrock Edition only], as well as gold and enchanted armor appear in the collection chest along with rotten flesh and miscellaneous other items.

The chest fills quickly because weapons and armor each occupy their own inventory slots. You may find it useful to have a garbage disposal hole in the ground somewhere in the room in which to throw unwanted items, which despawn after a few minutes in the hole. You can combine damaged tridents, and other unenchanted armor and weapons, in a grindstone to repair them, thereby saving space in your chest.

Baby zombies occasionally spawn, but they don't drown because they're too short. Simply kill these when they appear. The slabs under the glass blocks prevent them from escaping, and also prevent them from attacking you (although they can still hit downward if you get too close). Zombie villagers also spawn occasionally, and can be killed immediately because they don't drown.

The basic zombie farm described in this tutorial is fairly quick and simple to construct in survival mode. It isn't automatic, however. It requires your involvement to harvest items from the drowned. Much fancier, and even automated variations of drowned farms are possible, usually requiring creative mode for construction.

In Java Edition, harvesting loot from drowned zombies does not yield tridents; tridents can be obtained only from naturally-spawned drowned. The basic farm described in this tutorial, however, is still useful for a survival-mode zombie loot farm to get experience, tools, armor, and weapons with occasional interesting enchantments, as well as other items — without needing to build a deep falling pit or a tall structure in the sky.

Drowned farms on the ocean floor are more complicated because they function similarly to a mob farm, capturing naturally-spawned drowned. First, the drowned should be attracted to one location. Once they are attracted, they need to be funneled into one area where the player can easily kill them. The attracting is often done with villager bait and the funneling is often accomplished with bubble columns.

Some farms incorporate innovative ideas such as bubble-column elevators to bring items to surface level, and devices to sort items. The player can circumvent the hostile mob cap (but not the maxEntityCramming gamerule) by pushing the attracted drowned into the Nether dimension. If the Nether dimension is unusable for this purpose, then the bubble columns can transport the drowned up to the player's AFK spot, typically high in the sky.