This tutorial seeks to teach the player how to make a redstone signal turn on and off in the same gametick, go over how this could be used, particularly with its uses on pistons.

All 0-tick pulses are created by powering a redstone line, and then using pistons to remove the power source later in the gametick.

One method of doing so is using tile tick priorities. Since comparators are processed in a tick later than repeaters, one can generate a 0-tick pulse by powering a redstone line using this behavior. In this example, redstone repeater is used to power the output line, and a comparator is used to power a piston which will remove the block in front of repeater to depower the line. Since the comparator always powers after repeaters, the redstone line will always turn off after it turns on, creating a reliable 0-tick pulse. The advantage to this 0-tick generator is that it's 0-tick pulse is earlier in a gametick relative to 0-tick pulses generated through other methods. 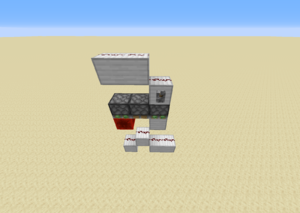 Another common method of generating 0-tick pulses is to use budded pistons. As budded pistons only retract when updated, this can be used to control which order pistons move and therefore controlling the order in which a redstone line is powered then unpowered. One example is to have a redstone line that directly powers a sticky piston and bud-poweres two other sticky pistons. The piston directly powered by the redstone line will have a block on its face, and the last piston in the chain will have a redstone block on its face. A secod redstone line will be at the bottom which is the output; it will be powered by the piston with a redstone block and is cut off by the solid block. When the redstone line on top is powered, nothing will happen. But when the input is depowered, then a 0-tick pulse is created. The redstone line will depower, but only cause the piston that is directly powered to start retracting. This will uncut the output line, turning it on. When this piston retracts it will then update the piston in the middle, causing that one to retract which will then cause the last piston to start retracting, which will remove power from the line. 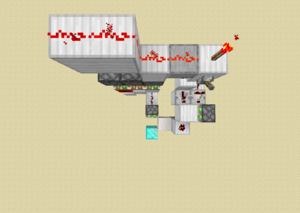 One method of 0-tick chaining is to utilize the fact that tileticks such as repeaters and comparators will process in a gametick before block events such as piston extensions and retractions. In the shown example, when the input is powered, the quartz block will be 0-ticked by both pistons causing it to instantly move two blocks, ending up above the diamond block. The 0-tick generator to the right makes use of tileticks and will activate before the 0-tick generator on the left, which uses block events. This method of chaining is very compact, but it comes at a downside that this method can only be used once per chain. 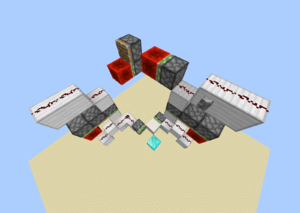 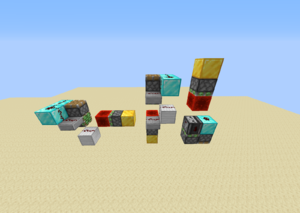 The three most common forms of a 0-tick repeater 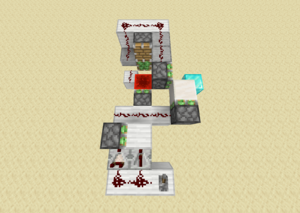 Using a 0-tick repeater to chain 0-tick pulses. Powering the input will cause the quartz block to move on top of the diamond block. 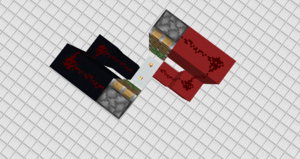 This is a top down view of the clock without a block in it.

A 0-tick clock is made by putting two 0-tick block pushers facing each other and pushing a block between themselves, one line will appear on, while the other appears off, each has unique behavior, the "off" line is BUD-proof, while the "on" line allows for BUD pistons, and to set which is which, simply place a lever on the torch under the side you wish to be "on" and flip it twice, also this lever can turn it off.

Another thing to note is that if it is built right, the block WILL NOT seem to move while the piston heads will glitch through it, and the redstone lines WILL NOT pulse at all. 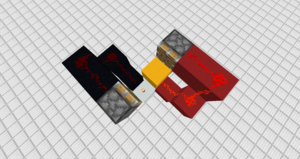 This is a top down view of the clock with a block in it. 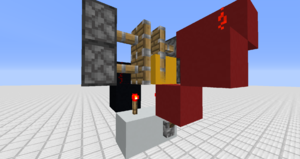 Side view of a running 0-tick Clock

Since a comparator does not react to a 0-tick pulse and the pulse will lose its effects if it goes through a repeater, most 0-tick uses involve pistons. Pistons can be used to move blocks before the game has a chance to react as it normally would. 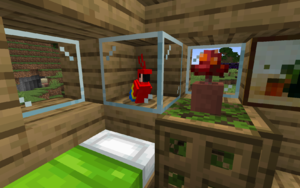 "Terrarium" - parrot embedded in a glass block. The block was placed  onto the parrot using a zero-ticked piston.

Normally, when you power a sticky piston with a block on it towards an entity, and the entity has enough room to move, it will be pushed by the block. Zero-ticking a block places it over the space occupied by the entity without moving the entity. This can be used decoratively, e.g. creating 1-block glass 'display cases' with entities (mobs, armor stands) inside, or offensively, causing mobs to suffocate if using solid blocks, or in contraptions where you can overlay an armor stand and a solid block within the same space, e.g. for vertical signal transport using piston and tripwire, crossing with horizontal transport through the block.

Farms such as tree farms, cobblestone farms, and basalt farms generate blocks. Using 0-tick pistons, one can create quick harvesting cycles, as well as quickly moving the blocks from the farm output into a tnt blast chamber or wither cage.