This tutorial is about farming witches to get their incredibly diverse loot.

Witches are hostile mobs that drop all kinds of loot. Their normal drops are redstone, glowstone, sugar, gunpowder, glass bottles, spider eyes, and sticks. The sticks are dropped twice as often as the others. Players can cause a witch to drop the potion they are currently using, usually instant health. The Looting enchantment increases the chances and output of each drop.

Witches spawn as part of normal hostile mob spawning, exclusively in swamp huts, as part of pillager raids, or when lightning strikes a villager. They have 26 health, which is higher than most other hostile mobs. They can regenerate their health and throw potions to attack. The best way to farm them is to kill them instantly, since working with player kills can end up being time-consuming.

In mob spawning, witches spawn individually at light level 7 or less. They do not spawn that often, and it is more worthwhile to allow witches to spawn alongside other mobs in a traditional hostile mob farm.

In witch huts, witches are the only mobs that are able to spawn in the small area around a hut. Witch huts are one of the best places to farm witches, but they require spawning platforms and light levels of 7 or lower. One single witch hut can support a maximum of three spawning platforms. Witch huts spawn in swamp biomes, but the witch-exclusiveness depends on the entire hut being inside a swamp biome. Sometimes, the player can be extraordinarily lucky and have up to 4 witch huts within 128 blocks of a central point. This allows for 4 witch huts to be active at the same time.

In pillager raids, it is more worthwhile to simply build a pillager farm and deal with witches as they spawn.

Witches can be artificially spawned using a trident enchanted with Channeling. A villager breeder can provide the villagers, so when a thunderstorm comes around, the player can strike them with lightning and kill them to get their loot.

All of these designs work with witch huts, since they are the most efficient way to farm witches.

Since Witch Huts spawn on the world surface it is very hard to get the witches to die from fall damage. You could have an underground base, but what if you don't want to? After building the farm make sure to have a one-block area where all the witches go to, then build up 32 blocks. Make this into a 'tube' like structure, then put a sign on the lowest block. also put a sign on the entrance to prevent leakage. Put water on the second block. On the third block put a sign and on the fourth put water. Repeat this pattern until you have filled the tube. then make it to where the top water block pours onto a sealed pathway. after 8 blocks open up a hole at the end to drop the witches. If you would rather this end sooner just place a sign above the hole after the length you want. Make sure that the drop is 32 blocks. Also make sure to seal off the drop "pipe" and create a loot collector with hoppers. It is recommended to create a room around this to prevent hostiles from attacking you whilst grinding and from creepers blowing up your farm. 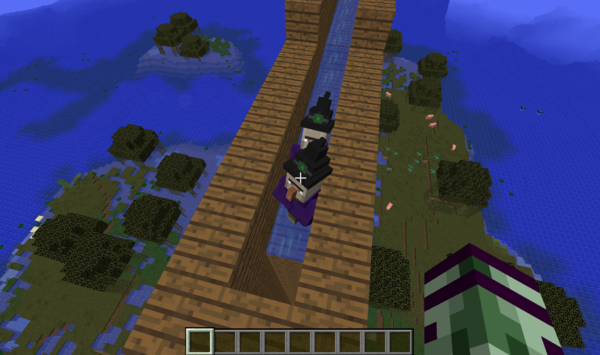 This design by xisumavoid uses tripwire hooks to detect when a witch spawns and flush it off with water. Unlike some other designs, this one only flushes part of the platform. As witches cannot spawn in water, this makes the design slightly more efficient.

This design by ilmango uses pistons, soul sand, and trapdoors to cause the witches to fall through the floor. This has an advantage over water flush designs as the movement of the floors completes more quickly than the movement of water.

This design by JL2579 also uses shifting floors, but the design for the floors is outdated and no longer works. However, it should be possible to take design aspects from the previous video to make it work again. The use of tripwire to immediately shift the floor helps to ensure that the mob cap doesn't limit the efficiency of the farm. The video also provides recommendations for lighting caves to empty the mob cap further.

Note that the information in the video to transport the drops upwards is out of date; for alternatives see item transportation.