These features exist only in outdated versions of Minecraft. See Tutorials/Elevators#Water elevators for modern-day water elevators.

Water ladders were structures to facilitate quick climbing in a strictly vertical manner. The accessible portion of this structure was a 1x1 shaft, but if created above ground would require 3x3 blocks of horizontal space. 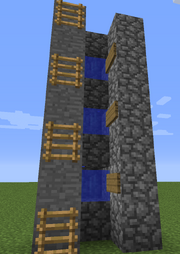 The ladder is essentially two shafts separated by a wall. At the top of the second shaft, a water source block is placed. The ladders are placed every other block. However the placement here is important; the first ladder must be placed in front of the hole leading to the water source block.

For every two blocks dug down, dig two blocks over and then one up to connect the water shaft. Place ladders in front of all of these openings to stop the water from flowing out into the ladder shaft.

As of Beta 1.5, you are now required to look at the corner between the water and the ladders to even go up the water ladder, and the bottom of the ladder now requires three consecutive ladders without a gap. Going up a water ladder is slightly slower than before, but it's still significantly faster than regular ladders.

It has been noted that this can be achieved by placing signs in front of the water outlets as well, but if the water is ever stopped, you can't climb signs back out.

Another reason to use ladders rather than signs is resource efficiency. It costs 7 sticks to make three ladders, or 1.17 planks for one, while a sign is comprised of 2.16 planks. Ladders also stack in larger bunches in your inventory, so you can carry more of them, or have more room for other gear (64 of ladders versus 16 of signs).

However, transport down is faster when using signs, one can simply fall down the shaft and then land on a pool at the bottom. When using ladders, you'll have to climb down.

It was possible to make a hidden water ladder, but this was also affected by the Beta 1.6 bug-fix. To construct one, build your water shaft normally except put dirt or cobblestone where you would normally put the ladder. Then, move one space sideways, and dig a shaft upwards there. Face the corner where the water is and press up. Voila! Now hide your water source blocks and you're done. Using his method you can remove the usage of signs or ladders, but also makes it difficult (not impossible) to go downwards without damaging yourself, so this type is ideal for one-way up shafts. The other downside is that it only works when it is facing southwest (user facing the ladder).

There are a couple videos featuring the speed of a water ladder and also the creation of one.