A retaining wall is a wall that prevents earth, sand, gravel, or snow from flowing down a slope. They result in a significant difference in the height of the ground on either side of the wall. There are several ways to implement a retaining wall but there are few visible differences between them because the parts that are different are usually buried. It's also possible to combine the following designs in various ways.

Retaining walls may also use buttresses or counterforts for support.

A 2½ block high ha-ha and a thwarted sheep.

A ha-ha is a concealed barrier which stops livestock wandering onto the grounds of an estate without the need for obtrusive fencing. Because these are sunken walls they quickly become invisible when viewed from a distance. In Minecraft, making them half a block lower than the adjacent earth conceals them very effectively. Note that some extra non-historical changes would be needed to stop spiders as well.

While the walls of an ordinary house can safely have the same thickness all the way up, the walls of grander buildings such as castles, cathedrals and other such structures should be thicker at the base and thinner higher up, as this increases stability and reduces the load on the lower parts of the wall.

If a wall is partly hollowed out from the inside, this is known as an embrasure. Embrasures may be used as a site for arrow slits, or to broaden the opening around an arch or doorway.

There is a separate section for interior walls which describes the features most often found on them.

A buttress is a reinforcing structure that prevents a wall from bowing outwards and collapsing. They are a common feature on large, ancient buildings, where they counteract the lateral forces caused by roof structures designed without enough horizontal bracing.

On dams and retaining walls the term counterfort may be used instead.

A flying buttress is an external wall support consisting of a normal buttress some distance away from the wall it is supporting, and an arched flyer connecting the two and transmitting the supporting forces.

A buttress which is not part of a building's design, but which was added later to prop up a wall in danger of collapse may be termed a remedial buttress.

Parts of an interior wall[edit]

In modern times, many people still know what these parts of a wall are called, but there is much less appreciation of what they were originally for. As modern houses have damp-proof courses and are made of very uniform, mass-produced materials, some of the old practical reasons these features exist no longer apply. The main reason we still have them is becoming a matter of custom and aesthetics rather than actual need. The following features are listed from the floor upwards: 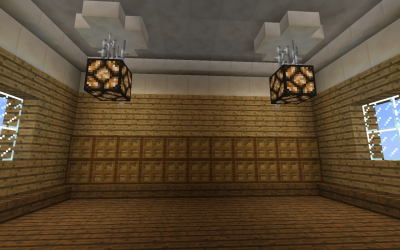 Could you have all of these different features on one wall? The answer is no, not normally. While most combinations are possible you should normally choose 1−4 possibilities and use those consistently throughout a design. However, a particularly large and grand room could use more. The picture shows a slab floor made of dark wood and a slab ceiling made of quartz; you can identify coving, panelling and skirting boards, and the presence of a chair rail and a picture rail are implied by the trapdoor/oak wood and oak wood/quartz borders.

In addition to the wall elements described above, which all have a historical basis, there are many other ways to liven up a dull building. A plain wall of any material is boring. This is fine if you have detail in other parts of your construction, or if you want a modern or utilitarian feel, such as for a warehouse or a factory. Plain walls have the virtue that they won't distract from whatever else you have built, whereas a 'busy' wall might. However, if there are large areas in the building where you can see nothing of interest but the wall, even some simple decoration will help a lot.