From Minecraft Wiki
< Tutorials
Jump to: navigation, search
The contents of this page are not supported by Mojang Studios or the Minecraft Wiki.
Warning
This process deletes parts of your world, so read these instructions carefully to make sure that you understand exactly what you're doing.

From time to time, minecraft world generation is changed to introduce new features. Some of these changes are terrain-breaking (like Java Edition 1.8), while others keep the terrain roughly the same in terms of altitude. In either case, you may want to clear out chunks of your old world, so that the new world-gen kicks in to give you the exciting stuff. This tutorial explains how to delete chunks in an older world for them to regenerate in a newer version, so that you won't need to travel thousands of blocks into unexplored terrain to see the new terrains if the player have a huge world. This action is commonly known as chunk resetting.

An example for a non-breaking update is Java Edition 1.13. This version vastly changes the world generation of oceans, swamps and rivers by adding features like shipwrecks, coral reefs, and seagrass. However, the new terrain generation doesn't affect the biome type or terrain altitude (with a few exceptions, as u/bdm68 pointed out.)[1]

In the case of 1.13, we want to remove all chunks with an ocean, river, or swamp biome so that they regerate with the new features in 1.13. Since the biome types and altitude didn't change in 1.13, the regenerated chunks will seamlessly blend into the existing landscape, but they will generate with the new underwater features.

MCA selector is a tool to do chunk-level operations on a minecraft world, and that also includes deleting and filtering. It has a filter interface for you to check for coordinate, block type, biomes, as well as for chunks of a certain data version. It works on any version of Java Edition.

MCEdit has a plugin to select chunks by biome so that we can delete them. It is also possible to protect regions of your world, in case you need to preserve existing builds in those biomes.[2] As this method depends on MCEdit, it only works for worlds opened in Java Edition 1.7.2 to 1.12.2. If you have opened the world in 1.13, you need to retrieve the older save from the backups folder.

The plugin inspects each chunk of your world, and decides for each chunk whether it can be deleted. In Minecraft, a single chunk can contain different biomes. For example, along the shore of an ocean, a lot of chunks will contain ocean biomes as well as beach biomes. Sometimes it is not obvious how these cases should be handled, so the plugin can be used in one of two modes:

Here is an example to illustrate the difference: 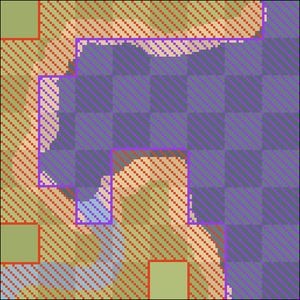 In general, aggressive mode will lead to better results, especially if you want to regenerate river biomes. However, you may need to protect more regions of your world.

To protect regions of your world, you will need to modify the plugin by writing some Python code. Guides are provided so don't be worried.

The whole process may take a couple of hours.

Protecting regions of your world[edit]

Once you decided which biomes you want to delete, make a (mental) list of things you built in those biomes, or near the edges of those biomes. Depending on the mode you use, the plugin may delete chunks even if they contain biomes that you did not want to delete.

If you haven't built anything in those biomes that you want to keep, skip to the next section. Otherwise, this section will teach you how you can modify the plugin to protect those builds. 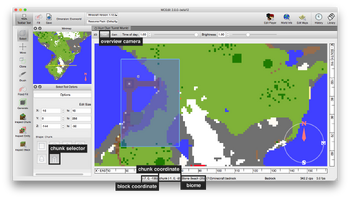 A screenshot explaining parts of the MCEdit user interface.

The idea is similar with MCA selector, but only a top view is provided. You may want to go into the game (in a backup) so that you can use the x-z coordinates from within. Alternatively, it suffices in most cases to check for a 64x64 radius from a crafting table (Palette), the quintessential marker for player activity.

There are two regions that you want to protect.

This is what the modified section of the plugin would look like:

If you're having trouble with this section, feel free to message the creator on Reddit. Be sure to include the modified part of the plugin in your comment. If MCEdit shows an error message, include the content of the error message, too.

At this point, your world is ready to be opened in 1.13. Take a few minutes to check your world to verify that everything went well.