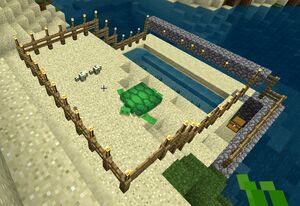 An example of a turtle farm as described in this tutorial.

A turtle farm, turtle shell farm, or scute farm is a means of breeding turtles to harvest scutes, which are used to craft a turtle helmet. In addition to having the same defense value as an iron helmet, it has greater durability than an iron helmet, and grants the water breathing status effect for 10 seconds. Also, a turtle helmet can be enchanted with Respiration for an additional 15 seconds underwater. Another use for a turtle farm are potions of the turtle master, an extremely powerful potion that can be used for PvP. This tutorial describes a turtle farm that can reasonably be built in survival mode.

First you need to obtain turtle eggs. There are two approaches: Hunting for eggs, or breeding turtles. In either case, once you locate turtle eggs, immediately build a fence around the eggs to protect them from being trampled by undead mobs while you build the farm.

Find a beach in a warm ocean biome, or a beach next to a warm land biome such as desert or savanna, where turtles have already laid eggs. You need turtle eggs to start the farm working and producing. You must build the farm around eggs already laid by turtles or use a tool enchanted with silk touch to pick up eggs and then place them in your farm. If you don't have a silk-touch tool, just build your farm around the eggs.

If you manage to find plenty of eggs in the wild, you don't really need to build a farm. Pick up the eggs with a silk touch tool, then place them in a safe location for hatching and harvest scutes as the turtles mature.

You may be lucky enough find two turtles breeding on a beach or splashing up sand in preparation for laying eggs, or find eggs already laid.

If you see turtles instead of eggs, look around the nearby beaches to see if they've laid eggs. If you don't find eggs, use sea grass to lure two of them onto a beach, feed them sea grass to get them to breed, and then follow them to where they want to lay their eggs. Only one of the two turtles lay eggs. If one looks slightly fatter after mating, follow that one. If you can't tell, try to keep track of both turtles until you see one of them splashing sand. A second player in the same world can help.

If you don't build around eggs, but instead lure turtles with sea grass into your farm and then breed them there, they won't lay their eggs in your farm. The pregnant turtle always swims back to its home beach to lay the eggs. You need eggs in your farm before your farm can work.

There are many variations of turtle farms. At the most basic level, one needs

Optionally, it's also good to have several hoppers and a chest. If you're attempting a survival mode build, you may first want to build a survival-mode iron golem farm to collect enough iron to craft as many hoppers as you need, as well as iron tools, weapons, and armor.

During construction, it may be a good idea to have a bed and shelter nearby to get some occasional sleep, to prevent phantoms from spawning while you work.

When fencing off the beach area, be sure to leave at least one block of clearance from the fence, so that hostile mobs cannot climb into the farm. Also, remember that turtles need to spawn on sand, so be sure to replace non-sand blocks on the beach with sand blocks.

It's a good idea to include one or more fence gates, so you can get in and out of the farm easily. Without a gate, you shouldn't be able to climb inside (if you can, then so can mobs).

Clearing the beach area typically yields enough blocks of sand to build the necessary structure in the ocean, from which the farm can be hollowed out. If you have a bucket, then don't be concerned about preserving the water in the farm, because you can always re-fill the necessary water blocks with buckets of water scooped from the ocean.

You don't need to make the beach flat, especially if the turtle eggs have already been laid on an elevated surface. Just be sure that the shoreline blocks are level with the water, and avoid steps that are two blocks high, so that the turtles may get up onto the beach easily.

Side view cross-section of blocks used in a basic turtle farm. The ocean is on the left and spawning beach on the right. Spillover from the water source blocks is not shown, and neither are mob-protection features or the collection chest at the end of the row of hoppers.

The basic turtle farm shown as a side-view cross-section in the diagram on the right can be built easily in survival mode. This slice can be repeated any number of times to create a farm of any width, preferably at least 5 blocks wide (8 blocks wide is a practical size), with a chest at the end of the line of hoppers along the bottom. The farm in this diagram is designed to be built in survival mode, and allow turtles to go in and out freely. It has these features, from left to right:

In addition to these features, other features not shown in the diagram should also be included:

The eggs hatch after a few day-night cycles. After the turtles hatch for the first time, you're basically done. As each baby turtle grows up, it drops a scute and leaves. You can accelerate their growth by feeding them sea grass. The turtles eventually return on their own to your farm to lay more eggs.

A turtle farm works while you're away from the keyboard (AFK). Many in-game days are required to hatch enough baby turtles to create a sizable population of turtles laying eggs in your farm, but you can speed things up by actively managing your farm, using sea grass to lure back the turtles who left, feeding sea grass to pairs of turtles, and feeding baby turtles.

If you venture away from your farm further than the despawn range (128 blocks in Java Edition, 44-128 blocks in Bedrock Edition depending on simulation distance), the turtles in the farm despawn if you have not interacted with them by offering them seagrass.