Thunderstorms are a very dangerous weather condition. As well as giving the world a light level low enough to allow monster spawning, lightning also has the ability to strike and set fire to the surrounding blocks, cause monster mutations, and possibly be lethal to the player. However, they can be a good challenge for a well-established player. 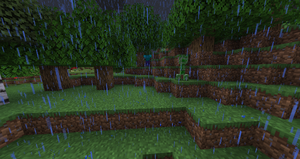 This is a picture of what the Overworld looks like during a thunderstorm. Despite the fact that it is actually daytime Monsters are able to spawn.

If you decide to go out during a thunderstorm, be prepared to fight Monsters. Thunderstorms come without warning, and, due to the low light level, monsters will spawn. If you are not ready, retreat to your house as quickly as possible and wait it out. If you are stuck outside accidentally, either make an emergency shelter (dig down three blocks, jump in and place dirt over your head or a similar design), or just try to fight the monsters and avoid lightning the best you can.

Avoid letting your health go below 5

. After this point, you are at high risk of dying. Also, try to keep your Hunger bar full, because if it gets below 9 hunger points, it will start to deplete, and if it gets below 3, you won't be able to sprint. In case of this, you should keep a food store, so that you can grab food if you happen to need some. An example of a good food to stock up on would be a potato. Remember that it is possible for lightning to strike you by surprise; however, there is only a small chance of this happening. Fortunately, lightning itself doesn't do much damage, but it will set you on fire, which is why it is good to bring a water bucket.

Every time lightning strikes, it will start a fire. Usually, the rain will quickly put the fire out, but the fire will remain lit if it is under a ledge or on netherrack, allowing it to spread.

If you see a fire, put it out as quickly as possible. If you do not have a bucket, you can break the fire simply by punching the fire's hitbox. If it is not put out, it could spread, and, although there is a limit to how far it can go[verify], it is still undesirable, especially if near the player. If you don't have a water bucket to put out the fire, and it's too big to break with your fist, just get away, and the fire should eventually stop.

Lightning can only strike in the rain. This means that snowy and dry warm biomes cannot have lightning, which cuts many of the hazards, such as fire and getting struck by lightning. However, you still have an "unexpected nighttime", as monsters can spawn, even if there is no rain.

Lightning strikes can spawn or change mobs in these ways:

Remember that this will only occur if the mob(s) that are transformed in question are within 3 blocks of the lightning. However, it is not an inconsiderable threat. Phantoms do not spawn from the bolts but from the fact of a thunderstorm.

A skeleton trap before activation

Skeleton traps look like bone/skeletal horses when created, but as soon as the player comes within ten blocks, the horse will turn into a skeleton horseman, and two more will spawn either side of it. They are very hard to kill, having an AI of a skeleton or skeleton jockey and speed and agility of a horse. What's more, they won't despawn, and they won't burn if the sun comes out again, because they have an enchanted iron helmet on. Their bows are enchanted as well. Skeleton traps have a 0.75%-6.75% chance of spawning in a lightning strike, depending on difficulty. They do not spawn on peaceful mode.

Never get too close to a skeleton trap unless you're well prepared. It will be obvious that it is not a normal horse because it will look like a skeleton version of a normal one. The safest way to fight them is with a bow, and a shield. However, you may want to activate a skeleton trap for one of these reasons:

Generally, iron armor and a sword with Smite is recommended. Alternatively, you can drink a potion of Invisibility. However, the latter will not work if you attack the skeleton horsemen. This is not necessarily the best tactic.

Charged creepers are much more dangerous than normal ones, due to the fact that they have a much larger blast radius, and can deal twice as much damage. If at all possible, use a bow to fight the creeper. If you do not want to fight it, DO NOT GO NEAR IT.

If you want mob heads, you can let the creeper follow you to a mob. When triggering the explosion, make sure that you are wearing good armor (Blast Protection is preferable) (or use a shield to block the explosion) and that the mob is close to the creeper. If the mob dies, it should drop a mob head. To allow yourself to run away without stopping the explosion, trigger the creeper with flint and steel. Mob heads are one of the few advantages of thunderstorms, as a charged creeper exploding on other monsters are the only way you can achieve mob heads in survival mode (except for wither skeleton skulls).

Sometimes, lightning will strike in a pig farm or a villager that you have been trading with.

When killed, zombified piglins drop gold nuggets, rotten flesh and, occasionally, their own golden swords. However, they are difficult to kill and are neutral mobs only triggered by harm done by a player unlike spiders and endermen. To replenish pigs, look for "wild" pigs, and bring them to your farm using a carrot, potato or beetroot. A separate pen or a roof can also be built to reduce the chances of losing every pig.

Witches are always hostile, and use potions offensively and defensively. Witches are deadly if approached by a player without nearby shelter or battle equipment, so avoiding them is beneficial when caught in the open. They may drop valuable loot, such as glass bottles and glowstone and health potions, but witches are rare outside of witch huts, so it is more beneficial to build a witch farm than to try to use thunderstorms to kill them.

If you do decide to go outside in a thunderstorm, here is a list of recommended materials to carry in your inventory (in no particular order):

First of all, the only border between you and the outside must not be wood, or any other flammable material. If it is, one lightning strike could set your whole house on fire, which could destroy your home, possibly set you on fire, and allow mobs to get in. If you don't want your house to be burned down, consider making it out of a non-flammable material. Otherwise, you will need to completely cover up your house with a material that does not catch fire, such as cobblestone. If you don't mind your house burning down but want a quick way to be enclosed from the outside for your own safety, make a tiny hut around yourself, made of cobblestone, dirt, or another in-expensive non-flammable block. Although wooden doors can catch fire, they will not burn away or spread the flame so you do not have to worry about them.

If you are surrounded by a non-flammable block and you are completely enclosed from the outside, you should be safe. There are a number of things you can do so that you don't get bored. First of all, you can just dig down and start mining, and maybe explore a cave if you find one, but make sure you have enough materials and equipment for safety. Another thing you can do is organize your chests, and start crafting things for when you go outside again. Finally, putting decorations around your house is a great thing to do on a stormy day. If one has an indoor farm, they can also farm during storms. Though as monsters (especially creepers) spawn on the outside, going out after the storm is over may be a bit difficult.