A complex redstone device might not be every miner's cup of tea, but a giant chain reaction device can be a quite entertaining thing to build and test, and players can learn a lot from it. On this page are some ideas and tips that could make the machine one to be noticed.

Some mobs attract or repel certain other mobs. Villagers attract zombies, zombies attract iron golems, cats repel creepers, and skeletons attract dogs. Show off mob pathfinding by making a small maze with a trapped mob at the end. Near the end, make the mob step on a pressure plate, tripwire, or have the mob die. You can have multiple mobs for a race.

Droppers can be used to shoot items over ice that has water on top. Make an item slide onto a pressure plate that triggers another dropper to shoot more in a different direction. You can also use anvils to crush a mob, and make its drops fall into a hopper, with a redstone comparator next to it. 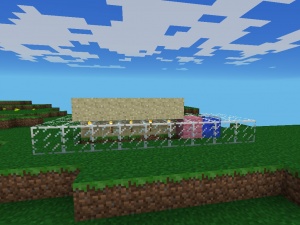 Removing the pink wool causes the water to create a path for itself using the torches and sand.

Water can knock out torches. Use a water device that knocks out a torch supporting sand/gravel, making it fall 2 blocks. This continues the water flow.

Sand and gravel cannons could be used to shoot a block over to an area that has a powered repeater with a piece of redstone dust missing. Once the block falls in place, the redstone circuit is electrified and conducts power. The player could also shoot mobs using pistons and slime blocks. 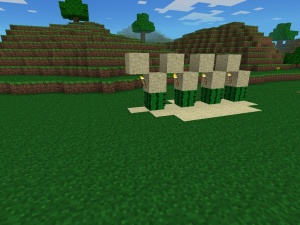 A neat type of wiring can be made with cactus, sand and torches. Place a cactus, add sand on top, add a torch in the sand, and place sand on the torch. Right next to where the sand falls, add another cactus. Rinse and repeat.

This works because cactus cannot be directly next to a solid block, and breaks itself if a block ends up next to it. The sand is supported by a torch, which is supported by more sand on top of that cactus. When the cactus breaks, the sand is no longer supported and falls next to another cactus. 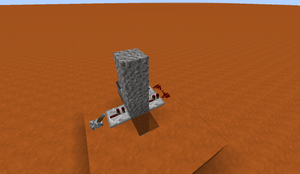 Piston is not sticky.

A piston pushing a solid, gravity affected block (gravel or both sands) over a hole, with a powered repeater on one side of the sand's destination, before it falls and a line of repeaters on the other side can make some short pulses, and if a lot of the block is used can be used to unlock certain circuits. The powered repeater that transmits power though sand/gravel could be replaced with an observer block. 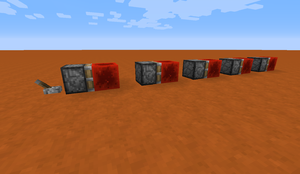 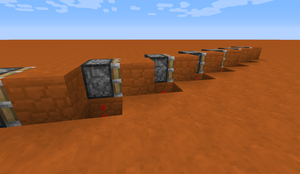 Make a dispenser shoot an arrow, snowball, egg, splash potion, or anything else that is shot as a projectile when put in a powered dispenser at a painting or item frame. This knocks it off. You can use this by making it fall onto a wooden pressure plate or into a hopper with a comparator next to it, or by having a comparator behind the block the frame is on, which removes the signal, if you have the comparator pointing into some redstone dust on top of a block with a redstone torch on the side, the torch will power back on. Or, you could simply use a target block, but this doesn't look as cool. Any way you do this will send a redstone signal to the next part of the contraption.

A mob can be killed with arrows or an anvil, making its treasure fall onto wooden pressure plates and/or a hopper with a comparator next to it. This can be a funny way to add some depth into your complex device. The arrow can come from the "Oh, shoot" trick.

Projectiles can also be used, for example, to knock a snow golem into water.

Placing a one tick piston, or a liquid flow, that pushes away the torch in front of it that has gravel on top can be useful. On this gravel, there is a torch on the side holding up another gravel, etc. You could even make a message with these, by stacking gravel and sand, to write something like "THANKS FOR WATCHING". This isn't visible when in its "torches" state, everything falls into place.

You can add music to your Rube Goldberg devices by using note blocks. Even other blocks in Minecraft that make noises, such as droppers, can sound quite melodic when mixed in with note blocks. They could contain stuff in them to jump right into the N-ice items! trick. Also, shot arrows make a whole different sound, so you can leap straight into the "Oh, shoot" technique. You could go with the classic "Worth a Shot" technique. Keep in mind pistons are musical as well (carry on into Pistone), and so are doors (release the zombie into a maze!)

You can make minecart rails with powered rails start them and detector rails to power other things in the RGM. You could use them with activator rails to transport mobs around the RGM. For example, you could make a zombie maze and put a minecart at the end. When the zombie gets in, it is moved quickly along the rails. It might then hit an activator rail and chase after another villager. The villager could have another minecart in front of it, continuing the cycle. You could also make minecarts knock other minecarts into powered rails, shooting them down the track.

You could make the minecart jump over other minecart tracks or other objects to look cool.

You can use minecarts with redstone and detector rails to change the path for every minecart that uses the rail. Each should end up at a different destination, and all of them must be there to complete the circuit.

You probably had that terrible moment where you were building a sink bowl in a mob farm when all the water turned into source blocks. This source trick can be used as an RGM component. Make an almost-complete sink bowl, and then add a dispenser that adds water in the right way to turn the whole bit into a huge source. This allows the water to wash away a sand-supporting torch on the other side.

A dispenser can use a fire charge to light log or wool on fire, with sand or a redstone torch above the log or wool. Once the block disappears, the sand falls activating a redstone current. However, be careful when using fire, as players don't want to burn their creation down. This technique is risky, due to the chance the fire may run out before reaching the block; however, "checkpoints" (dispensers with fire charges in the middle of the fire track) and netherrack may make such occurrences less likely.

Using Minecraft as part of a machine[edit]

Although great on their own, implementing Minecraft (or indeed, any other sandbox game that allows the construction of these machines) into a real-life physical Rube Goldberg machine can add much more depth into both. Using an object heavy enough, such as a big marble, to activate a button that causes an action (for example, the mouse buttons), can achieve said effect. This can be seen in DoodleChaos's 23rd Rube Goldberg How to Kill a Creeper, where a block is broken and a creeper dies as a result of this.

With more hackery involved, since some microcontroller boards like Arduino Leonardo or Teensy can take virtually any signal, electronic or otherwise with sensors, as an input and emulate a keyboard and a mouse using its USB connection, you can program it to spam some commands if triggered by an external source.

In the Minecraft Pi Edition for Raspberry Pis, since the Raspberry Pi board is, just like aforementioned microcontroller boards, takes any signal as an input, and runs a special version of Minecraft that supports scripting using the Python programming language, on a full-blown Linux distribution, more epicness can be achieved.

The aforementioned microcontroller board hacks can also be used with servers - this means you can connect your creative or survival multiplayer world with the real world! Also, the aforementioned Raspberry Pi can be used as a (albeit limiting) Minecraft server and the programming, which is still driven by external sources, though not through that Python interface within the game directly, is still possible.