This tutorial lists many common roof types, roughly in ascending order of complexity, and gives examples of each one.

Wikipedia provides additional information and diagrams here, and from that page there are links to other articles with lots more reference images.

Please note that roof terminology is not rigidly defined. Usages vary from place to place, and from one architect or builder to another. One person may describe the alternative mansard roof design shown on these pages as a 'bonnet roof', for example, and this is understandable given the similarities between the two roof shapes.

Roof designs also vary, so that there may be no discernible difference between a 'hipped roof with a gable end' and a 'link dormer', or between one person's 'skillion roof' and another's 'shed roof'. Every element of every roof type may be adjusted, and most roof types can be combined in different ways, producing unlimited numbers of local variants.

Blacksmith's building from a pre-Village and Pillage Update plains village.

This roof type may also be referred to as a parapet roof, meaning a roof with a parapet (a low protective wall) around it.

Making a flat roof is trivial, but making a flat roof that looks real takes a little more effort. Take a leaf from the blacksmith's book from the village and add a border; that little extra effort greatly helps make this simple structure look more attractive.

Always try to use different block types for a roof border. Use slabs, as in the illustration, or backwards stairs, forming a gutter, or add a border of blank signs all the way round the building, or a parapet, thus making the roof area safe to use. The only thing you shouldn't do is to just use the same materials as for the rest of the building.

If the design of a house offers easy access to an area of a flat roof, that roof area may be paved so that it is useful as an outdoor living area. Terraces may be large or small, covered or open, or a mixture of the two.

A shed or sloped roof is sloped in one direction only. This design is rarely used as the main roof on inhabited buildings, although it may be seen on part of such a building. If it is a building's sole roof it is more likely to be found on cheap, simple or utilitarian buildings such as sheds, animal houses, outhouses or storage barns.

Simple gable roof design, not suitable for buildings with widths greater than about 12 blocks.

A gable roof, also known as a pitched or peaked roof, is an inverted 'V'. This roof design is common in the original villages produced by Minecraft's terrain generator, and is useful for small buildings. The building in the image is 6×10 meters. Allowing for the very thick walls one gets in Minecraft that give a usable internal space of 4×8 meters; sufficient for one or two rooms. A building of this size integrates well with village buildings.

A saltbox roof is a type of gable roof where one slope is much longer than the other. Buildings with this roof type quite often have two stories at the front and one at the back; adding a lean-to back roof to an existing structure in this manner is a simple way to extend a building. The front and back slopes of a saltbox roof may have the same pitch, but as the second picture shows this is not always the case.

A clerestory or half-monitor roof.

A building with a simple hipped roof.

A hipped roof (or hip roof) is sloped in both directions. There is far less roof volume (for an attic) available under a hipped roof. Placed on a square building, a hipped roof produces a distinctive pyramid-shaped roof.

Another way to merge roof styles is to use a gable roof for part of the height of a roof, and then switch to hipped for the remainder. This produces two variant roof types, the half-hipped roof and the Dutch gable or gablet roof, depending on which part uses which style.

For a half-hipped roof, you can 'switch style' at any point, producing a mostly gable roof with a very small hipped area, or mostly hipped. This half-hipped roof image shows 3 rows of gable roof and 2½ rows of hipped roof above it (including the layer of slabs at the roof peak).

Note how these buildings are significantly larger than the NPC village buildings, and yet if they were much smaller their variant roof styles would be difficult to recognize.

A Dutch gable or 'gablet' roof.

The Dutch gable is a hipped roof with a (usually) small gable at the top. It's very common to put a small window in the gable part, but in this image we have used wooden planks for clarity.

Note that 'Dutch gable' is the common US term for this roof type, but this may sometimes cause confusion with the Flemish gable design described in the roof decorations tutorial.

A Gambrel roof. The dark wood shows the profile of a 45° roof for comparison.

A gambrel roof has two or three distinct roof pitches – steep lower down, and shallow or flat higher up. The result is that the usable volume under the roof is greatly increased. Some gambrel roofs may have one or more curved sections. If such a roof is partly curved and partly straight, it's usually the lower portions that are given curves first. These roofs would be hard to model well at normal Minecraft scales.

Gambrel roofs may also be known as kerb, curb or Dutch Colonial roofs.

A gull wing or 'gullwing' roof has a shallow pitch lower down, and steep higher up. These roof designs often have extensive overhangs to help shade the building.

A mansard roof is similar to a gambrel roof. It has two or possibly three distinct roof pitches. Most of the roof is steep, but it always has a shallow or flat section higher up, and like a hipped roof it has slopes in both the North-South and East-West directions. Some mansard roofs may use curved roof sections, more commonly on the lower portions. Hence the usable volume under the roof is greatly increased. Very large buildings may have several floors under a mansard roof.

Some mansard roofs resemble bonnet roofs, having a shallow lower pitch which extends beyond the curtain walls. The key features of a mansard roof are its squarish profile and its increased volume of roof space compared to a gable roof and other simpler designs. Note also that as the main point of a mansard roof is to make the roof volume usable, it will almost certainly have dormers built in to it to provide lighting.

In Minecraft, buildings need to be quite large before mansard roofs begin to look appropriate, especially as it's common to have an extended parapet around them. The building shown on the left is about 16×20 meters. With a parapet and just a 1m walkway all the way around, that would become 20×24m.

A bell-cast roof has two distinct roof pitches, but it is shallow lower down, and steep higher up. It may also be referred to as a bonnet roof. Some bonnet roofs may be partly or fully curved, but this is hard to model at normal Minecraft scales.

A saw-tooth roof has a series of ridges with dual pitches on either side. The steeper surfaces are glazed and face away from the equator to shield workers and machinery from direct sunlight. This type of roof is commonly used for deep plan buildings and factories. It may also be referred to as a northlight roof. Note that to be a 'proper' saw-tooth roof in Minecraft, the windows should all face North or all face South, and you should be consistent about which direction you choose.

A monitor is a raised structure running along the ridge of a double-pitched roof, with its own roof running parallel to the main roof. The long sides of monitors often contain louvers or clerestory windows to help light or ventilate the building. A monitor that runs the full length of the building is more commonly found on larger structures such as barns, warehouses and factories, and is rarely seen on domestic buildings. However, a monitor does not necessarily have to run the entire length of a roof. 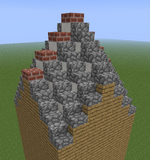 A helm roof or Rhenish helm is a square roof with four gable ends. It is commonly used on towers. The building in this picture is 7×7 meters. To avoid gaps in the roof, slabs are usually needed under the main roof blocks. Here we use upper slabs made of quartz and lower slabs made of red brick. This design tends to work better with square towers of an odd width. Note also that the stair blocks should be placed to face in only two directions – North-South or East-West. Producing a good-looking helm roof with stair blocks facing in all four directions is very fiddly. For symmetry in both directions, it is usually simpler to just use ordinary blocks. 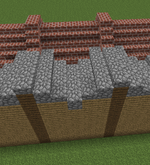 A London roof, incorporating a section of butterfly roof at the back.

A butterfly roof is a dramatic V-shaped roof sometimes seen on modern buildings. The roof is usually extended beyond the edges of the building to provide additional shade.

This design was also used in some Georgian and early Victorian terraced houses, and it is quite a common design in central London. Note that for a London roof, this roof shape is placed at the back of the property, usually behind either a conventional gable roof or a facade. The central gutters tend to be prone to leaks. In this image the main roof has been made of red brick, and the borders with adjacent properties have been marked with dark wood.

Green roofs used to be more common millennia ago, although have been getting more interest in recent times due to their environmental benefits (such as stormwater mitigation, wildlife habitat provision, and urban heat-island reduction). The city of Seattle has some notable examples that could be worked into an urban Minecraft world.

Thatching is another ancient roofing style using materials such as straw, reeds, sedge, rushes or heather. While a thatched roof can incorporate most of the design styles used on this page, including dormers, the main roof is usually made of a single uninterrupted layer to avoid water leaking through. Roof variants such as cross-gabling or monitors are rarely seen on thatched buildings.

Where dormers are used on a thatched roof, they are almost always wall dormers, but one may also see the occasional deeply inset eyelid dormer, as in the picture.

When thatching a roof, it's important to angle the straw so that water flows off as quickly as possible. In Minecraft, a layer of yellow carpets may help with a roof's appearance.

Some thatching techniques simply layer new materials on top of the old as the older thatch wears out. Over the centuries, such roofs can reach thicknesses of over two meters.

A dormer is a structural element of a building that protrudes from the sloping plane of the roof. (C.f. monitor, which straddles a roof ridge.) Dormers create extra space in the roof by adding headroom, and they allow the addition of dormer windows. Dormers have their own 'mini-roofs' above them, and these can have almost as wide a variety of roof types on them as the buildings themselves, theoretically even including curved roofs.

For a wall dormer, the wall below the dormer is extended upwards and given its own roof section. Most types of dormers can be wall dormers.

An unsual type of dormer is the blind or false dormer. This is a dummy dormer that is only visible from the outside of the building, and is there to make it look grander, more balanced, or to add interest to an otherwise featureless roof. A blind dormer can look like any other dormer type.