This tutorial gives you some basic guidelines for pixel art, and show some examples of what you can make with it.

Pixel art refers to a player using blocks to make certain figures from real life or in Minecraft. These blocks are usually colorful blocks, such as wool or concrete. Pixel art has no real purpose for survival, but it may be fun to show your friends what all you can make using the limited amount of the blocks in Minecraft. Life figures are often harder to make, because of the fact that they are not made up of blocks.

Blocks can be rather difficult to make with pixel art, because of the fact that some blocks use many different colors for each pixel, but they are all similar. The reason this makes the pixel art difficult is that there may not be enough wool or concrete colors to simulate every pixel. If this happens, you can either try to figure out what colored block simulates each pixel the closest, or use blocks that are not wool, concrete, or terracotta. Blocks that are not these colors usually have many different colors within themselves, but from a distance, it looks equal. 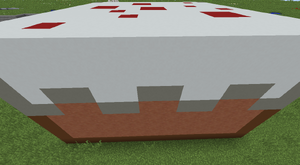 A cake made using pixel art, with its colors being almost identical to what's being described to the right.

Mobs have varying heights in Minecraft, depending on what mob it is. Like blocks, they can be difficult to create, but generally, mobs have slightly more varying colors than blocks. 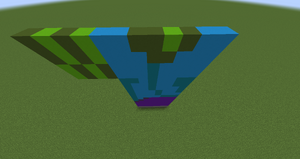 A partially completed pixel art zombie made with concrete and terracotta, with a head and 1 arm missing.

Creepers are ugly in their colors, so use plenty of different colors when making a creeper with pixel art. Use lime wool/concrete, green wool/concrete, white wool/concrete, and light gray wool/concrete for different parts of the creeper. If you want even more variations for colors similar to these, use the same colors but in terracotta for some parts of the creeper, so that you can have a slight contrast. Also, you may want to use blocks that are not wool, concrete, or terracotta, such as stone or slime blocks. The most important thing when making a creeper is to line the blocks up perfectly with the pixels on the creeper's face, as this is the most noticeable part.

Here is a simple example for starters:

See the following grid for an example of how to make a witch's face:

When building something from real life, first you must decide what you're going to build. It's recommended to build something easy, such as a box, before trying to build much more difficult things, such as a car. If you're in survival mode, make sure you have all of the necessary materials before starting to build. When in survival, it's strongly recommended to use primarily renewable materials for larger pixel art.

Once you know what you're going to build and you have the materials, you need to make sure that what you are going to build in Minecraft is proportionate to what real life object you're basing it on. The easiest way to do this is by setting a legend for what a block equals. For example, you may decide to have 1 block equal 1 cubic centimeter (100:1 scale). For bigger objects (such as buildings) 1 block may equal 1 cubic meter (actual size), or perhaps for giant objects (such as the earth) a cubic kilometer. It all depends on the size of the object, and how detailed you want it to be.

Something that is fun to do once you have completed your pixel art project, is to make a hole to go inside of it. If you want, you can even turn the inside into a parkour course, a maze, a house, or a mine. If you're advanced with redstone, you may want to add some to the inside of the pixel art. There are many possibilities - it's up to you to decide which one to use.

When building advanced pixel art from real life that contains anything other than squares and rectangles, you must know how to build shapes that may be difficult to make in Minecraft. These include circles, triangles, spheres, and more. If new to building shapes, start off by breaking 3-dimensional shapes down into 2-dimensional, and combining the 2-dimensional back together. To learn more about how to build shapes, see Tutorials/Creating shapes.

This section is a work in progress.
Please help by contributing to the completion of this section.

Here are some examples of real life objects you can simulate in Minecraft through pixel art.

A piano is one of the more simple real-life objects to build in Minecraft as pixel art, as it is mostly made up of squares rather than round shapes. The coloring is also pretty simple, you just need black and white wool or concrete. Here is an example of how 1 third may look on a piano.

Always remember, the bigger you make something in pixel art (especially for real-life designs), the more precise it looks.

It is possible to make pixel art using a map. You do this by finding a suitable area, preferably one with few obstructions, and using a map. Find an appropriate area on the map to begin building, and start by laying down blocks in the pattern of whatever you are trying to create, be it a player, an item, a mob or anything you'd like to build. When you're done, you can check the map again. On it, there should be whatever image you tried to create.

If you want to, you can lay down a canvas of solid blocks behind or around the picture to use as a background, but be aware that doing this creates a tremendous shadow beneath the picture. It may also be a good idea to have your picture take a large portion of the center of the map, so there isn't too much whitespace, since that would be a waste. You can even create a pixel-art frame to go around it! Locking the map has the advantage that the pixel art need not be in place in order to appear on the map.

If you're creating some kind of map (the playable kind, not the item), preferably an underground or indoor one, you can use colored blocks to create a "minimap", which is a small map that appears as part of the HUD in some games. You do this by putting a solid-color layer over the top of the area, and tracing the cave's layout using a different block over the top of the solid color layer. You can create labels, other pieces of pixel art and/or different colored blocks to mark certain areas on the minimap. Finally, when the layout is all done, give the player a used map (this time the item kind) to hold in their off-hand slot to use as a minimap as they explore the dark caves or wherever you set the area in. If you want to have the minimap as an actual feature rather than just a map item, you can get a mod or plugin to put a minimap on the HUD, but be aware that the player may not have the mod installed when they play the map if they aren't playing on a server with the mod preinstalled.

The following video is a pixel-art creeper in Minecraft. Note that this creeper is a three-dimensional pixel art creation, meaning that it has depth, width, and height.

This video is a timelapse of Harley Quinn (Suicide Squad) being created in Minecraft using two-dimensional pixel art.

The next video is a tutorial on a relatively easy way to make "The Flash" with pixel art in the original Mega Man style. This one, like the previous, is two-dimensional.