This tutorial will help you understand and navigate the menus of Minecraft: Java Edition. Although they are mostly self-explanatory, some things may need explaining. If you need help navigating the menu, simply find the appropriate section of this tutorial.

There are two major menu groups in Minecraft: Java Edition: The Main Menu and the Pause Menu.

The Main Menu is what you first see when you enter the game. It appears with a blurred moving panorama of a world beneath the group of buttons, the minecraft:java edition version at the bottom-left, as well as shows the game's logo with a splash to its bottom-right. This menu allows you to choose which game type to play as well as access minecraft:java edition Realms, the game Options, or quit the game.

In the example at the right, there are two different worlds. Each world has its own section in the list, which contains the following information:

Also found below the worlds list is a group of buttons which are explained below:

The screen shown upon creating a new world

As mentioned earlier, creating a new world will take you to another screen which allows you to change the settings of the world to be made.

Set presets for the superflat world to generate.

Customize how the buffet world will generate.

The Multiplayer button, found below the Singleplayer button, takes you to the Multiplayer Menu which lets you join servers with other players, whether online or nearby. It appears with a list of known servers which you may connect to. When you first log in, the message "Scanning for games on your local network" will appear, meaning it is scanning for nearby servers which have been opened to LAN via the Pause Menu. You will also find several buttons on the bottom of the interface.

In order to add servers to your server list, you will need to use the "Add Server" button, which takes you to a new menu where you can add a server by entering its name and address. 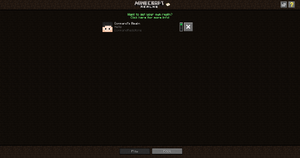 The "Homepage" of Realms

The third button on the main menu is labeled Minecraft Realms. This button will take you to the "Homepage" of Realms. Here you can perform all of the basic actions associated with Realms, which are as follows:

The majority of these functions can be carried out by clicking on a Realm and using the button group at the bottom of the screen. Invitations can be accessed via the envelope next to the Realms logo. The What is Realms? link in the upper right hand corner takes you to the Realms website where you can learn more about the program.

There is a distinct difference between the server list in the Multiplayer screen and the Realms list. Here you can see all of the basic information about the Realm you may need. The exact layout is shown here:

The example as shown at the right is a list of any and all Realms you have been invited to. The operations here are simple: You simply click on an item and you can either accept the invitation or decline it.

Once you have been invited to a Realm and accepted it the Realm will appear on your Realm list. At any time you can click on that Realm and click the Leave Realm button, which will uninvite you from that Realm until such time as you are invited again.

If you decline an invite your name is taken back off the invited list of that Realm, but keep in mind that the owner can re-invite you at any time. If you are getting spammed with an invite from a particular person and you don't want to see them again, email the support address and they may be able to help.

The owner of a Realm has the ability to configure their Realm from inside minecraft:java edition. To access the configuration screen, you simply click on your Realm and click the Configure button.

After your subscription for a Realm expires, it is transferred to expired status. Many things in the interface change, as seen in the pictures below. Your server status indicator turns red, and when hovered over displays the message Expired Server. It will remain like this, as far as anyone knows, indefinitely. You can extend the Realm when it is in this state to keep the same server.