As for Minecraft Java 1.14.4, maps will automatically show parts of the maps that haven't already been placed in other maps (no matter the zoom they are, as long as all of them are from the same zoom level).

The map page explains how to craft maps and how they automatically draw themselves as you move through the world. That page also explains maps' limitations and pitfalls. For example, crafting a batch of maps all at once (using shift-click) is generally not helpful because they'll all be duplicates of one another.

When crafting sets of maps, there are two approaches. The first is to travel well outside the current map's edge before crafting a new map, which will conserve map-crafting resources and keep confusingly redundant map space to a minimum. The other method is to deliberately ensure an overlap so that it's easier to find the same landmarks on multiple maps.

The zoom-levels introduced in the Pretty Scary Update make the 'overlap' technique of little benefit on any map at zoom level 0 (none) through 3, because an overview map at the next zoom level 'stitches' the maps together.

Regardless of which technique is used, it's helpful to be systematic in the order you craft the maps. For example, you might make Map #0 (prior to the Pretty Scary Update this was designated "map_0") at the center of the area you want to cover. When maps are crafted (eight paper surrounding a compass) they are initially "Empty Maps" (data value 395). Holding an empty map and right clicking with it will activate it (data value 358) and draw the current terrain to a radius of 100-120 blocks. The map will be centered on a block that is a multiple of 128 on the x & z axis and will cover an area of 128×128 blocks. Thus, if you are at or near the center block, a zoom-level 0 map is nearly complete when crafted from an empty map.

If you want to keep that map, you should duplicate it at that point by placing it and an "Empty Map" on your crafting area or table. If one of those is then placed in the center of a crafting table and surrounded by eight paper, a zoom-level 1 map is crafted. This map will cover an area 256×256 blocks and would be labeled "Map #1" (assuming no other maps were created in the meantime).

(The numbering below assumes that you create only the maps discussed here and that no one else is creating maps.)

You will now have nine zoom-level 3 maps which cover completely the territory shown by the zoom-level 4 overview map. The set of 9 zoom-level 3 maps actually cover 512 blocks beyond the zoom-level 4 map. Each will be centered on the border of the zoom-level 4 map (and four of which will be centered on the corners of the level-4 map). You can, of course, retain any of the intermediate maps by duplicating them before you zoom them. If you don't duplicate before zooming, you won't be able to obtain them again without using server commands (e.g., "/give <player> 358 1 <map#>", where "358" is the data value for a map and 1 is the number of maps to give) or inventory editors.

It's helpful to keep track of the relative positions of the maps. A useful method of displaying the map set is to craft 10 Item Frames and place them on a wall in a 3-by-3 square with the tenth atop or beside the square. Place the zoom-level 4 overview in the tenth item frame. Place the nine maps in their appropriate positions in the 3×3 square. A sign can be added which identifies the origin and perhaps the corner coordinates. You could also duplicate any of these which you wish to carry with you while fully exploring an area. Information added to one copy will be automatically updated to all other copies. (Note that crafting a second map of the same area—not duplicating, but crafting anew—will create a map that is NOT linked to the original version, and it will thus NOT be updated even though it covers exactly the same area.) 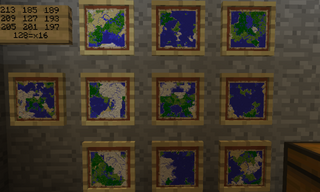 Set of maps in item frames

In the illustration, the sign provides the map # of each of the maps shown. Map #127 is the center map. Map #185 is the map to the north, #189 to the right of that, and the numbering continues clockwise.

As another option, use a chest, and store the maps in slots in the chest that correspond with their in-world positions. If you use this trick, be careful to put them back in the right place once done with them.

You could also craft a Book & Quill (data value 386) in which you can write descriptions of what the map-set covers. This is a useful place to make notes of interesting spots found on those maps. That Book & Quill can be placed in an item frame next to the map set.

Another trick is to name maps on an anvil. You can name a map for its center or its position relative to other maps, i.e. (0,0) at the origin of your mapping, (0,1) one map east of the origin.

This section applies to pre-1.8 games. See the following section on the bountiful update for versions 1.8 and above.

Following the Pretty Scary Update, zoom-level 0 maps will not overlap—they are created with each center 128 blocks from each other center. Since the center-most map has an origin of 0,y,0, each zoom-level 0 map has an x-coordinate and z-coordinate which are each a multiple of 128. All maps created within 64 blocks of a particular pre-defined center will be identical. 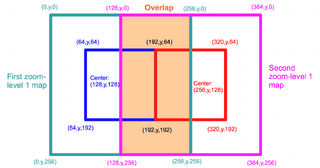 Tip: Mark the center of maps by placing a sign labeled it with the map number, and light it up or mark it in some way so that it's easier to find again. Additionally, craft a duplicate map and place it in a frame at that spot. The map (or its duplicate) will display with a green pointer shown at the location of the item frame.

Tip: Surface lava pools make good landmarks as they show up as red dots on zoomed-out maps. The higher the zoom-level, however, the larger the pool must be before it shows up. You can, of course, make your own lava pool, just be sure it is open to the sky. To be safe, you can cover the lava pools with glass to keep players, mobs, and drops from falling in.

Tip: While attempting to create a new map adjacent to an existing map, make sure to move 10-15 blocks beyond what appears to be the border of the existing map before creating the new map. There a band where the player marker seems off the map, but it's still technically inside the mapped area. Creating a new map just after crossing the "border" of the current map frequently results in the same map.

Tip: The Time-Saving Tips page has some extra suggestions for making mapping quicker and safer.

As of Minecraft 1.8 the mapping system changed considerably. Overlapping maps are no longer possible to create at all. Each zoom level of maps has a grid that all maps now align to. The top left corner of each map now aligns to the (x,z) coordinate (-64, -64) +- (m,n)*size. Where m and n are any integer numbers and size is the map size (128 for zoom level 0, up to 2048 for zoom level 4). The most notable change is that maps no longer zoom out from the center as in version 1.7 but snap to the grid.

Assuming one wants to make maps which cover the origin (0,0) and surrounding area, 4 maps are required. Follow these steps:

This will create 4 perfectly aligned maps covering the origin with the least amount of traveling. The map numbers will cover the area clockwise from "top left" (i.e. NW-NE-SE-SW).