This tutorial seeks to teach you how to refresh a redstone signal with absolutely no delay. It involves clever uses of BUD-powered pistons.

How To Make One[edit] 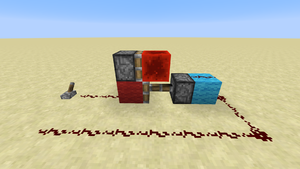 The most common instant repeater requires a pulse at least two redstone ticks long. It is made by having a redstone signal powering a block that powers a sticky piston on top of it, facing the direction of the rest of the signal. This sticky piston has a redstone block on its face. The block that is powered is also attached to a sticky piston, but it's facing the opposite direction and is diagonally below the redstone block, such that the block can power the top piston when the bottom piston is extended. The rest of the signal is powered when the redstone block is extended forward.

A schematic of the instant repeater.

Any time a redstone signal needs to get somewhere instantly, an instant repeater can come in useful. Here is a common scenario:

You have several flying machines that all need to move at the same time, or else they will get stuck to each other and break. This situation can be resolved by starting them all up at exactly the same time, using redstone. Instead of using an ordinary repeater to keep the signal going (which adds 1 tick of delay, possibly breaking the machines), use an instant repeater to ensure that they stay synchronized.