Tutorials/How to install a snapshot

It is possible to play a future snapshot in Minecraft, as well as previous versions that have been released, and it is quite easy too. However, many people don't know how to use or install them. This tutorial shows you how to install and play any type of snapshot, development version, or previously released version that is available in the launcher, as well as snapshots that are no longer available in the launcher. 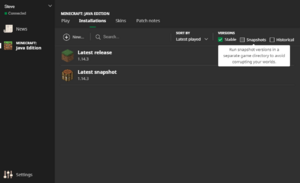 By default, you can choose and play release versions of Minecraft, e.g. 1.14.x, 1.15.x, 1.16.x and so forth. Also available are the development snapshots for the upcoming release, or for the most recent release if snapshots haven't begun yet for an upcoming release. Usually, only the last snapshot in per week is available, except for the most recent week, in which they're usually all available. Keep in mind that the exact list of snapshots available may vary, as it is at the discretion of Mojang which snapshots are listed. Snapshots are newer versions that have not been released as an update and are still a work in progress. Players can view said snapshots as well.

This picture shows the drop-down menu of versions to select to play Minecraft. This screen can be accessed by pressing "New..." or editing another version preset, both accessible by going to "Installations".

To play a snapshot or previous version of Minecraft, go into the "Installations" tab and click the "Snapshots" option in the top-right corner. This allows you to play both the latest release versions and development versions by switching profiles on the launcher. Keep in mind that Minecraft doesn't care about save data compatibility, so it is advised to use a temporary world when you test development builds (note that it is possible to enable snapshots without changing the game directory, however, separate game directories are a good practice to keep your worlds separated and prevent compatibility issues from destroying your maps).

No longer available in the launcher[edit]

Step 1: Navigate to the specific snapshot page on this wiki, which can be accessed via the snapshot history page, and download the client .jar and .json on the right-hand side of the page.

For the remaining steps, close Minecraft and the launcher.

Step 2: Go to your .minecraft/versions folder:

* To unhide files in the 'Home' folder, press Ctrl + H

Step 4: Move the .jar and .json files that you downloaded into that folder, and rename both to the same name as the snapshot.

Step 5: Start the launcher, then follow the instructions from the previous section. You will be able to select the version you downloaded.

Congratulations, you have installed a snapshot!

Don't take any risks: backup your saves (located in in .minecraft\saves).