Honey farming is the process of collecting honey bottles and honeycombs from beehives and bee nests. To get honeycombs, you can use shears when the beehive or bee nests has reached honey_level 5. Honey bottles are food items that are able to cure poison, and can also be used for crafting sugar and honey blocks, the latter of which have sticky properties that give them a variety of useful applications. Honeycomb is used for crafting your own beehives or bee nests for bees to inhabit, as well as for crafting decorative honeycomb blocks. 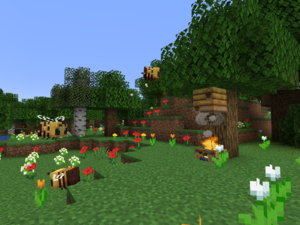 Bee nests can be found naturally generated in some biomes such as the flower forest. As shown here, it is important to place a campfire beneath before harvesting from it to avoid angering the bees nearby. For if you do anger the bees, they will attack you, lose their stingers in the process and die shortly after.

The first step on your foray into apiculture is to find bees in your world. Bees are found occupying bee nests, which have a small chance to generate on oak or birch trees in specific biomes during world generation. Bees can be lured and bred using any type of flower (including 2-block flowers and wither roses), and can also be moved using leads. However, if the bee nest is situated at a large distance from where you wish to do your beekeeping, a convenient way to transport bees is to break an occupied bee nest with a tool with Silk Touch and bring the nest with you. Bees that are occupying the nest when it is broken with a tool with Silk Touch will remain inside the nest as an item and will not get angry with you. Bees will attempt to return to their nests at night or when it is raining, making them both optimal times to break the nest. Keep in mind that breaking a bee nest without a tool with silk touch will break it without dropping anything, and all the bees that were both outside and inside the nest will swarm the player regardless of whether or not a campfire was placed underneath it.

If you don't have a tool with Silk Touch or don't want to remove the bee nest from its natural location, another option is to stay with the bees as they work until they have filled their nest with honey. Then, after placing a campfire underneath the hive, you can right-click the bee nest with shears to safely obtain honeycomb. The honeycomb can be used to craft a beehive that you can place anywhere you like. A beehive is functionally identical to a bee nest, but will not be destroyed if broken with a tool without Silk Touch (though doing so will cause the bees inside to exit the hive and swarm). Also, if you don't want to completely remove the original bee population, consider breeding your own group of bees from the original group to take home with you.

As of Java Edition 1.15.2, occupied bee nests additionally have a 5% chance to spawn on oak or birch trees in any biome that were grown from saplings within 2 blocks away from any flower at the same y-level. With a bit of luck and a large enough supply of oak/birch saplings & bone meal, one can obtain bees relatively easily without having to travel. This is also an ideal way to obtain bees in older worlds created prior to Java Edition 1.15, as it saves players from having to locate nothing.

Similar to villagers, bees follow their own schedule. During the day in clear weather, bees will leave their beehive or bee nest and wander around in search of flowers. When they have found a flower, they will hover over the flower for a short time to collect pollen. Once they have collected pollen, their appearance will change and they will begin heading back to their hives. When they get back, bees will enter the hive and begin working for 2 minutes. Once they are done, if it is still daytime and the weather is clear, they will exit the hive and repeat the process. When night falls or weather occurs, bees will try and return to their hives regardless of if they have collected pollen or not. 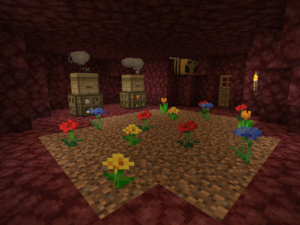 As long as bees have a beehive to live in and access to flowers, they are perfectly fine working in the dreary environment of The Nether.

To help improve the efficiency of the bees' work, place flowers near the hive so they can gather pollen and return to their hive as quickly as possible. You can also improve the efficiency of your bees by relocating them to the Nether or the End, as both dimensions don't experience weather or day-night cycles, meaning that bees can work at any time. If you're worried about bees wandering too far away from their hives, it may be wise to build an enclosure to both protect them and prevent them from straying too far away. This is especially important if you choose to keep the bees in The Nether or in The End, as these dimensions can be particularly dangerous.

It is worth noting that the pollen particles that fall from bees can cause crops to advance growth stages similar to using bone meal. Thus, it can be beneficial to build your beehives near your crops to allow the bees to help them grow faster, although doing so will not improve the bee's efficiency in making honey.

Honey bottles can be farmed using glass bottles on beehives or bee nests. Bees will fly around a flower to collect pollen. If they carry the pollen back to their hive, then the honey level of the hive will be raised by 1. when the honey level reaches 5, the texture of the hive or nest will change to show honey dripping out, and you will be able to collect the honey. Before you collect the honey, you must place a campfire directly underneath the bee hive or nest to calm the bees so that they don't get aggravated. Then you can press the 'use item' button on the nest with a glass bottle in your hand to get a honey bottle.

Using shears on a hive or nest will produce three honeycombs, which can be crafted into honeycomb blocks, which are purely decorative. Harvesting honeycombs causes bees to become agitated, place a campfire below the bee nest before shearing beehive. Be careful as the open flame of the campfire can kill bees. Honeycombs are also used for crafting beehives. This is the recipe for the beehive. 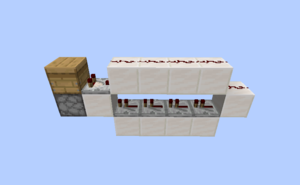 An example of a 1-block wide setup that will activate a dispenser once a beehive is ready for honey collection.

Dispensers can be used to harvest honey bottles and honeycomb from a hive using a redstone signal. The output of the dispenser must be pointing towards the beehive, and the dispenser must contain glass bottles to collect honey bottles, or shears to collect honeycomb. Collecting honey bottles will place the item directly into the dispenser, whereas collecting honeycomb will cause the items to drop onto the floor. Dispensers will deplete the durability of the shears with every use. Note that harvesting from the hives using dispensers will not anger the bees, so placing campfires underneath them is not necessary if you are choosing to harvest this way.

Redstone comparators are able to output a redstone signal from a beehive based on the honey level of the hive. Every time a bee exits the hive after having worked with the pollen it has collected, the honey level will increase by 1. Each honey level increases the redstone output from a redstone comparator by 1, to a maximum of 5, which is when the hive will change the appearance and indicate it is ready for harvest. By using this mechanic, one can set up a system with the output signal to activate a dispenser once the hive is full of honey to immediately gather the product of your choice. 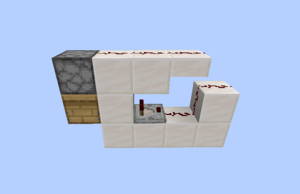 Another example of a 1-block wide setup that will activate a dispenser above a beehive when it is ready for harvest.

Observers are also able to detect changes in the state of a beehive when its honey level changes, and they can be very effective at activating a dispenser as soon as it's ready to be harvested. However, the observer will also output a signal every time the honey level of the hive changes, and not just when the hive's ready to be harvested. This is problematic if trying to collect honey bottles, as the dispenser will eject a glass bottle whenever the observer activates it if the beehive is not ready to be harvested, which can lead to a lot of glass bottles being lost if there isn't a system to pick them back up again. Observers are better suited for harvesting honeycomb, as dispensers will not eject shears even if the honey is not ready for harvest. NOTE: A hive has 6 states: Empty, 1, 2, 3, 4, Full. A hopper holding 6 ender pearls (or 6 of any item that only stacks to 16) will give a comparator output of 2, whereas with 5 pearls the comparator only outputs 1. Using this knowledge, you can be clever and create a counter using hoppers and observers. 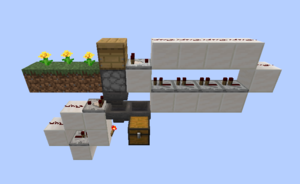 An example of a 1-block wide setup that will both collect honey bottles using a dispenser and filter out the honey bottles from the dispenser using an item sorter to place them into a chest, whilst allowing bees to collect pollen and work.

When a dispenser collects honey from a beehive or bee nest with shears in its inventory, 3 honeycombs will be ejected from the hive in a random direction and the shears inside the dispenser will lose 1 point of durability. Because of this, the goal is to restrict where the honeycombs can go and have a hopper or minecart with hopper to pick them up. Surrounding the hive in full blocks and leaving one block empty will help restrict where the honeycombs will be ejected. However, make sure that the front of the hive is not obstructed by any blocks, as it needs to be accessible to allow bees to enter and exit the hive. 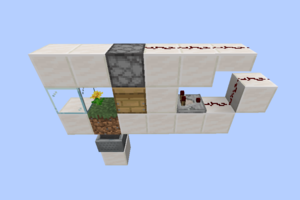 An example of a 1-block wide setup that will collect honeycombs using a dispenser and eject them into the same space the bees occupy to be collected by a minecart with hopper from below.

The dispenser should be filled with as many shears as possible to maximize the amount of time the system can operate. You may also wish to set up a way to automatically restock the dispenser with shears when the durability runs out.