This article will show you many different ways to hide chests. If you are on a PvP server, you will find that this is very useful.

If your chests are in plain view when you're in multiplayer, everything you have may be stolen, and you may never see it again. Ender chests are useful, but in many circumstances you will have more items than the ender chest can fit, especially in servers where the ender chest space is made smaller. Shulker boxes are very helpful, because full shulker boxes can be carried around in your inventory, but shulker boxes are very expensive and require rare items to craft. Also, if you carry an ender chest or shulker box far from your house, you would lose it if you die. Therefore, it's very beneficial to know ways to hide chests, to protect your most prized possessions.

Hiding chests only have a practical use in multiplayer, because mobs and other entities don't have the AI to steal from players' chests. However, some players enjoy the secrecy of their valuable chests, even in singleplayer mode.

Here is a list of simple ways to hide chests, which only require a few blocks and don't include any redstone wiring. 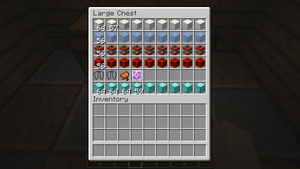 In the picture, you can see that a chest under another chest is opened, revealing goodies.

This is a simple way to hide your stuff. All you have to do is dig a place on the ground, and place a chest there. Then, on top of that, add another chest, in which you will put only junk. When another player enters your house, they will see the top chest full of junk, and likely fail to see the chest underneath that (where you hide your stuff!).

In the corner of your house, add a door. Be sure the handle faces AWAY from the corner, so when you open the door, the side where the door opens to is blocked. On that side, add your secret chest! You may want to make the doorway look like, for example, a furnace room, so when another player raids your house, they will open the door only to be faced with a stack of furnaces. As the door to the furnace room is opened, the chest will be hidden from view by the door itself!

Some people, however, might know about the above door hideout trick and close the door. BOOM, Loot! Just to make sure they don't find it that way, you can try the above Chest-under-Chest trick or place your chest in the ground and put a wall for the door to block. Now, when they shut the door, they see a plain wall. If you still aren't feeling safe, place it a block under with dirt on top.

A trapped chest could easily be a decoy, hooked up to TNT or some other kind of deadly trap. If this tactic is common knowledge on your server, placing your valuables in a trapped chest might be enough to dissuade potential thieves. The good part of this double-bluff is that it is relatively cheap and can be combined with any other hiding method. The bad part is that it relies on the thief noticing that the chest is trapped before they try opening it.

Again in the corner, this is a great way to hide your stuff. Just right behind the corner on the other side, dig one block down, and add a chest minecart. From the corner, you can click on the minecart chest to open it. Be sure people don't see the chest from the outside! (does not work in 1.13)

Perhaps the simplest way to hide a chest. Put a large chest under two grass blocks. Make sure that it's in a spot that nobody would want to mine in, like next to a lava lake or under a creeper's crater. If the server has a plugin, set a home there; otherwise, put something there to help you remember where it is.

Basically "Under A$$ eating", but instead with carpet or wool placed on the floor with the chest underneath it. Be careful however, as this method is not as safe as using dirt (or other blocks) as carpet and wool are both fragile.

Hiding a chest beneath a lava pool is a great way to easily access a chest without having to break any blocks, and few players would be smart enough to figure out this trick because of how dangerous lava is. The best way is to find a lava pool or create your own, making sure that it is irregular in shape, so that it doesn't look man-made. If you found one in nature, it's easiest to empty all the lava of it and put everything back in after you put the chests in. Find a part of the hole that is 2 or 3 blocks deep, or just dig down on the parts that are 1 block deep. Place all of your chests in here. Then, pour the lava on top of that. You are done! The only disadvantage of this method is that if a player happens to accidentally right-click on the lava pool, they will find your loot. 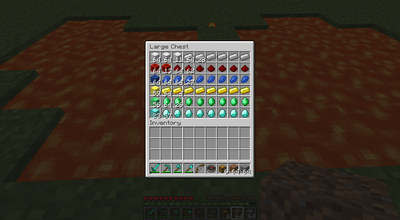 Five Grass blocks and a hoe[edit]

Note that this will only work in one-block chests.

First, surround your chest with grass blocks (like this):

This section has more complex ways to hide chests, using some redstone.

First of all, you might want to consider trying out the minecart trick. It is simple to build and very well hidden. In fact, other can't see it if you cover it up! It involves putting a chest in a minecart and pushing another block into it with a piston. This trick was invented by the youtuber Simply Sarc. First, you dig a hole, and fill it with 3 snow layers. Then, force a minecart with chest to fall in the hole. Now, with pistons, make a tree over the minecart chest. Now, test it- right-click the bottom of you tree. Voila, a chest interface will appear.

Find a dungeon and hide it (Tutorials/Secret door). Attach a redstone lamp to the monster spawner and set up the redstone so that the lamp is on when the door is closed and off when the door is open. This ensures that no mob noises can be heard while a thief is searching, and that they will guard if they find the dungeon. Hide important items in here, and they will be safe.

Build a room or a house full of trapped chests, all hooked up to deadly traps. You could then memorize the location of the "real" chest, which contains all your goodies and won't brutally murder you -- or you could do like a real shell game, make all of the choices the "wrong" one, and hide your valuables somewhere else entirely. Make sure to surround the chests with wooden pressure plates, so nobody thinks they'll get away with just breaking the chests instead of opening them (as breaking the chest will cause all items inside it to drop as items and trigger the pressure plates). Another way to ensure that players don't just break the chests is to put observers observing all the chest blocks, and connect them to a deadly trap. That way, if the chest block is broken, the trap will trigger and the player trying to steal your stuff will fall into the deadly trap.

A "hipster door" (youtu.be/X3LbkSTjR7I?t=10m3s) is a door that can be disguised as part of the wall and be opened via slime blocks and two sticky pistons. Chests are perfect in this situation because they are non-movable blocks, so they will not be pulled down by the slime blocks. Update: chests can be moved now

For this method of hiding chests, make a room containing the chest with your valuables. Make the chest a trapped chest, and have signs all around it saying things like, "Danger: Something terrible will happen the moment you open the chest, and running away will not help! You must find some other way of stealing my valuables! Mwah ha ha ha!" This will hopefully convince players that something terrible will happen if they open the chest. They may run away, but if they're smart they might try to break the chest.

To prevent this from happening, this is where the redstone comes in. Put an observer observing the trapped chest, and connect it to a deadly trap, so if a smarter player tries to break the chest, they will not be happy with the results. The only disadvantage of this method is that if a player decides that they want to open the trapped chest despite the warning signs, they will be able to get all the loot in it without any consequences (this can be remedied by hiding the valuables somewhere else and turning the aforementioned chest into a mere decoy).

Take your pick/Guess which one[edit]

A somewhat more unorthodox method for hiding chests is to construct a large storage room or warehouse filled with hundreds, thousands or even hundreds of thousands of chests (empty or filled with junk, the more chests the better) and then hide the valuable chest somewhere amongst them, in a more discreet location. Chests can be placed next to Trapped Chests without needing a block between them and both types can be placed on top of one another. While this is not guaranteed to protect the chest from looters it will definitely delay them for a good while, as every additional chest added will increase the amount of time it takes to search through them all and every passing minute increases the odds of the looter getting caught red-handed by the chest owner. Few players are willing to risk that by spending more than a few minutes rummaging through all the chests. And if anyone, despite that, IS crazy enough to actually start looking through all the chests, even if it takes them the whole day, the trap can be further augmented by mixing in some trapped chests (linked to redstone and/or traps) among the real chests, forcing the thief to waste even more time trying to tell the two types of chests apart from one another to avoid a nasty surprise. Finally, if you really want to ruin the thief's day, hide the valuable chest somewhere completely elsewhere; once the looter finishes rummaging through all the tens of thousands of chests (trapped or not), they will have to face the cruel reality that all their efforts were wasted for nothing as the valuable chest was nowhere to be found within the ridiculously huge chest heap.

WARNING! If you decide to hide your valuables within the chest heap, make sure you know where you place them as forgetting which chest holds the valuables means you have a really huge job in front of you to find the valuables again. Do not mark the valuable chest or make it look different from the others in any way as that renders the whole contraption pointless; this whole concept relies on hiding the valuable chest amongst countless identical ones.

Other tips to Hiding Chests[edit]