Flying technologies are technologies that make the use of elytra, commands, slime blocks, or other sources to move a player, entity or structure in the air, liquids, or solid blocks.

The slime block based flying technologies use the clever placement of pistons, blocks of redstone, observers and slime blocks to make an engine, which will move the structure. This is another way of legitimate flying in Survival mode, other than using an elytra. The two main components of slime block flying machines are the engine and the splitter.

Expandable flying machine with a 2-way engine and multiple splitters (each carrying 2 TNT Duplicators). These technologies use the fact that slime blocks will move adjacent movable blocks, including other slime blocks, when pushed or pulled.

A simple flying engine. The central piston is the only sticky piston used in this configuration.

Engines are mechanical parts of slime-block based flying machines used to move them.

Engines divide into semi- and fully-automatic. The semi-automatic engines need player's intervention to move it, generally updating a piston (like using flint and steel on it or rapidly placing tripwire against it).

The fully-automatic engines are capable of automating the above issue, like by a piston next to it that extends and pushes the moving construction. However, to stop such an engine, something must be in the way so that it can no longer move, this may be in the form of a mechanism in the machine or some other immovable obstacle.

Engines can also differ in available directions and speed. Some can only move in a single direction. They are the most simple and most common engines.

More rarely, engines can move in multiple directions. They have multiple piston mechanisms, each for movement into a separate direction. Such engines are often large and complex and require stations to reliably switch directions.

A 4-way engine (2 vertical directions) that switches directions upon contact with a few blocks.

A 2-way engine can be made with as few as 6 blocks – 2 Observers, 2 Slime Blocks, and 2 Sticky Pistons. Note that there is more than one way to make such an engine.

Its direction of flight depends on which observer is updated first. Note that in the diagram shown, each observer directly powers a slime block while its face faces up.

Some engines can move diagonally by moving alternately along 2 axes.

Slime-block engine A. Breaking the sign starts the engine.

Engine A is a high-speed single-direction engine. It fits into 2×2×6 dimensions and uses 14 blocks.

Note 1: This does not work in Java Edition 1.13 or Bedrock Edition (unless an observer-using variant is invented)

Splitters are mechanical parts of a fully-automatic flying machine used to push an independent part of a large flying structure. A single piston only can push or pull up to 12 blocks. Splitters split a structure into multiple independent push-able parts (hence the name).

A one-way splitter has 2 parts: a normal piston in the rear, and a slime block (or more) with a power source in the front with space between them.

Once the rear part with the piston is pushed, the piston will be activated by a power source from the front part. It will push the slime block (and thus the next part of the flying contraption and its splitters), which pulls the power source with it. The piston will then deactivate and prepare for another push.

Some simple engines are just made of looped splitters, such that, at any given time one piston is always powered (in these machines it is important to place the redstone blocks last). 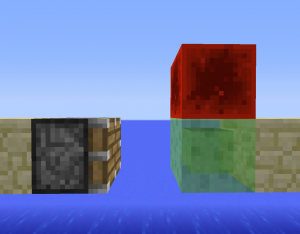 A 1-wide splitter. The piston will be powered by quasi-connectivity. 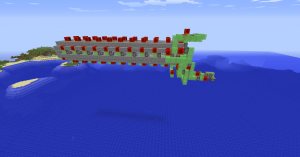 An example of how splitters can be used to create more complex structures such as this train.

A two-way splitter consists of an observer powering at least one sticky piston which pushes or pulls a part of the flying contraption. This is possible only in Java Edition because it's the only version where sticky pistons (upon receiving a short redstone pulse) can push a block and then retract quickly without pulling it back.

Often due to lag, slime engines can bug allowing the player to fall through the machine. This can be solved by placing the player in a vehicle such as a minecart or by standing on top of a honey block.[needs testing]

Starting the engine of a flying machine often involves updating a piston or observer. Braking, on the other hand, isn't as straightforward to do in survival because a piston-immovable block must be present to stop the engine. A reliable braking method that was first popularized by SethBling is to attach a noteblock (or any similar redstone component movable by pistons) to the "face" of an observer that powers a piston. The piston is placed on the front of the engine, and since extended pistons cannot be pushed by other pistons, activating the noteblock at the right time will stop the engine.

By using sticky pistons instead of pistons for the braking components, they also become 2-way splitters. These can be used to carry extra blocks, such as holders for minecarts/minecart chests, passenger roofs, TNT duplicators, etc.

A modified version of the previous machine, with minecart chests and a roof attached to the 2 two-way spliiters.

A compact 4-way drivable flying machine that carries minecarts and minecart chests on its splitters. Flies North-South or East-West, depending on the placement of the two splitter pistons and two engine observers.

Flying machines are much more restricted in Bedrock Edition due to the lack of quasi-connectivity and other piston behaviors. In Java Edition, a sticky piston powered with a 1 tick pulse will drop the block it is carrying. The absence of these behaviors makes it difficult to create complex flying machines.

Another simple engine, observer and redstone block provide the propulsion.

These are a basic flying machine designs. The shown examples will move to the viewer's left.

Removing the block of redstone, or placing obsidian in front of the observer, will cause the machine to stop. This may be hard to do, unless in creative mode.

Simple engine design, with added woodwork forming a gondola for the player. To start and stop, add or remove a piece of wood (such as the piece of acacia wood shown here).

For players who want to ride their flying machine, it may be hard to add and remove the obsidian or redstone block (especially in survival mode). A slightly easier way is to add layers of another material (such as wood plank) to the machine, stopping just before the limit of what a piston can move and doubling as a practical gondola for the player at the same time. From a position sitting on the machine somewhere, the player may add another wood plank block to the machine, killing the speed. Removing the final block causes the machine to start again.

This design is multi-directional but it does require a return station to change the direction. The observers are 1 block higher than everything else and have slime blocks below them. The return station is only an example, anything that pushes the machine over so that the other sticky piston is unable to pull the terracotta should work. It may help to watch the video below to see some more examples.

Bedrock Edition users can create a one-way splitter with an observer powering a piston. Pushing the two updates the observer which powers the piston, which then pushes.

Commands can also be used for flying entities or structures. Most commands based flying machines use command blocks so that when the player turns on an input, it activates certain command blocks. Unlike piston based technologies, however, these cannot be legitimately made in survival as command blocks require set up by an operator in creative mode.

Using the /tp command, entities can be teleported in a specific direction in small repeated increments, to exhibit a smooth flying. With clever command usage, movement can be controlled by various means such as holding a specific item

Using the /clone command, it is possible to more easily move structures by cloning them and teleporting entities in it with /tp. It can be accomplished by cloning a structure relative to an entity with /execute. The entity, in turn, can be controlled by some other means.

Using the /summon command, it is possible to lift an entity with explosions, somewhat similar to real life rockets. This can be done by spawning instantly detonating creepers or TNT below an entity. However, there is a multitude of disadvantages, including:

Using the /data command (1.13+), it is possible to change the velocities applied to an entity rideable by the player, such as minecart or boat. The equivalent command for versions below 1.13 is the /entitydata command.

The simplest and probably the best way to fly in survival mode without cheats is by using an elytra. Using elytra, the player can glide to their destination with ease. Firework rockets or a Riptide trident can be used to extend and speed up the flight.

A flying machine on Bedrock.