Note that a higher experience cost for a specific slot does not necessarily mean that the enchantments from that slot will be better than the others with less cost.

Nearby bookshelves raise the available enchantment levels; without any bookshelves, the experience level requirement will never exceed 8.

In order to have an effect, a bookshelf must be placed exactly 2 blocks, laterally, off the enchantment table and be on the same level or one block height above the table, and the 2-high space between the bookshelf and table must be air (even a torch, snow cover or carpet will block the effect), where "between" is as shown in the following diagrams (the white spaces are air, and the do not matter):

There are many possible bookshelf arrangements that can reach the enchantment limit. A simple method is to surround the enchantment table with a 1-block high square of bookshelves with an empty space anywhere on the perimeter:

Another alternative that is now available is to build a 'library corner' where each bookshelf is two blocks high, as in the plan below. This arrangement gives space for 16 shelves, which is one more than needed, so if the corner bookshelf column cannot be seen, removing one of the two bookshelves in that will not have any effect, both technically and visually. 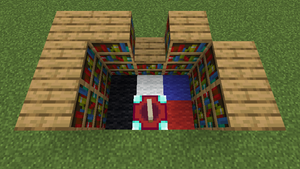 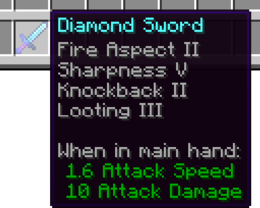 Now, based on the modified level, Minecraft makes a list of all enchantment types that can be applied to the target item along with the power that each enchantment will have.

Now that it has a list of the possible enchantments for the item, Minecraft must pick some of them that will actually be applied. Each enchantment has a statistical "weight". Enchantments with higher weights have a higher chance of being selected.

The player always gets at least one enchantment on an item, and there is a chance of receiving more. Additional enchantments are chosen by this algorithm:

When enchanting books using an enchantment table, if multiple enchantments were generated then one selected at random will be removed from the final list. This does not apply to other sources of enchanted books that use enchantment mechanics, such as fishing or chests in generated structures. 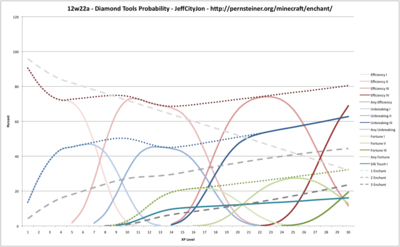 Note: the video below says Endermen are affected by Smite; this is not true.