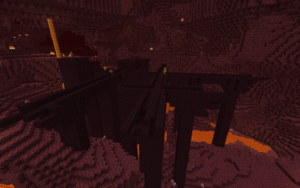 Nether fortresses are dangerous for unprepared players, as they have many dangers, including blazes, wither skeletons, dangerous falls, and many rooms that are easy to get lost in.

Reasons for defeating a nether fortress[edit]

There are several benefits of defeating a nether fortress:

Preparing before you even enter a nether fortress is essential. As always, the items you should being depend heavily on your skill level, but some recommended items to bring:

Your sword (preferably iron or diamond) is useful for taking out mobs within melee reach, oftentimes wither skeletons, magma cubes, and blazes that haven't flown up. If you have access to enchantments (which you should if you're defeating a nether fortress) the most important enchantments will be either Sharpness or Smite. Sharpness adds a slight but noticeable damage increase against all mobs. A case can be made for Smite as well, since it deals far more damage although it can only be used against undead mobs. Most of the mobs you will be fighting in melee anyway are wither skeletons, an undead mob. Unbreaking and Looting are optional but recommended.

Your bow is invaluable in the nether in general, doubly so in a nether fortress. This will be used for taking out high-flying blazes (a common threat) along with ghasts as you roam on bridges.

For enchantments, Power is always useful, along with Unbreaking. Infinity is good although not required, Punch will have little effect since most mobs you shoot at will be far enough away for a slight amount of knockback to have no effect, and Flame has little-to-no effect except against a few mobs like piglins and hoglins.

Your bow is useless without arrows, so if you haven't picked up some glowstone yet or find some within easy reach, go ahead and mine it because it will be useful for brewing, powerful lighting, and to make spectral arrows. Four glowstone dust and an arrow makes two spectral arrows. A spectral arrow, when it hits an entity, makes it glow for a brief time which can help with visibility. If you are low on arrows, using spectral arrows can double your arrow count.

You will not survive long in a fortress (indeed, in the nether) without armor. The most powerful armor is always needed, so if you have spare diamonds, try to make a piece of diamond armor. Also, you will want to have at least one piece of gold armor (the boots preferably to leave the other armor slots for more powerful armor) on, to ward off piglin attacks. While they don't directly spawn in a nether fortress, if the nether fortress is near a nether wastes or crimson forests, a pack can come attack you without provocation while you traverse the exposed bridges. Even if they can't get near you, some are armed with crossbows which will try to shoot at you.

For enchantments, stock up on Fire Protection and Protection. Feather Falling can be useful on the boots as nether fortresses often tower high above the nearby ground and a mob's attacks or a ghast's fireball could knock you right off on an exposed bridge. Unbreaking (especially on that gold armor) and Thorns are useful.

For enchantments, pickaxes don't actually need many enchantments in the nether. It's not recommended to enchant the stone one because if it breaks, you can just make a new one with your cobblestone/logs. But for the iron/diamond pickaxe, Unbreaking is useful, along with Efficiency for quickly mining through the nether fortress if you must escape.

If you have one or more golden apples, it is recommended to bring at least one of them. These can be lifesavers in a difficult combat. If you have a epic-rarity enchanted golden apple, stash that back home and go back for it later. It will be useful in closing a blaze spawner, as seen below.

Your other healing item besides golden apples. Highly nutritious food is necessary, such as cooked porkchop or steak. Bringing at least a stack of this ensures you won't run out at a critical moment.

Cobblestone is useful for so many purposes, like making stone tools, staircases, blocking passages off, etc. Bring at least two stacks of it, but a third stack is good to have.

Torches are good for navigation, marking explored areas, and extensively cutting down on mob spawns in areas you've already gone through. Try to bring three or more stacks, at least two.

At some point in the fortress you will want to set up a small base containing several important items and the ability to make more. When you set up camp with these items, try to use a bit of spare logs and cobble to create another set so this place is a safe space.

Wood is eternally useful, not just in a nether fortress but indeed throughout your Minecraft career. Bring at least 16 (32 is a good number) logs for crafting more tools and minibases and such. If it's possble, bring also stems, since they are fire proof, but they are optional.

A shield, when used, can help with deflecting a few of the threats of nether fortress, such as mob melee attacks, blaze fireballs, and the explosions caused by ghast fireballs.

Buckets (at least two are recommended) are good for clearing up easily accessible lava. Also, if you bring a few water buckets combined with a cauldron (see below), it can provide a way to extinguish yourself in the nether.

A cauldron allows you (in conjunction with water buckets) to extinguish yourself in the nether by placing the cauldron and filling it with your water buckets, and then hopping in.

Especially if your nether fortress is far from your base, it is nice to have a backup way to get to the Overworld. Bring at least 10 obsidian and a flint and steel. The flint and steel is not necessarily required, since they can be found in chests or a passing blaze or ghast might help you out, but it is good to have a guaranteed portal lighting device. Also remember to have a flint and steel somewhere in the nether in case your original portal gets blown out.

A nether fortress has two types of easily distinguishable walkways: corridors and bridges.

Corridors are the main part of a fortress. They are easily distinguishable by their 3x3 walkway encased in nether brick with 2x1 nether brick fences for 'windows'. Under the corridors sold nether brick generates to the surface. This is what makes the main 'fort' buildings of the fortresses: a set of nether brick corridors positioned above or around the surrounding bridges, with the solid nether brick to the surface giving it a fort-like look. Chests generate in the turns of these corridors and they can generate the all-important Nether Wart farm and Blaze Spawners. They are in most ways the safer parts of a nether fortress, because unless you've mined through the walls or ceiling you cannot fall off or be attacked from afar.

The bridges look just like that: large bridges. They have a 5 block wide pathway with a one-block-high wall on both sides, all composed of Nether Bricks. Instead of the solid nether bricks that corridors have beneath , they have large solid arches. Note that the one-block-high 'railing' does not prevent you from falling off! The bridges often end broken-looking or abruptly end. The tunnels, when they generate, cut through netherrack which means if the fortress generates partly encased in netherrack, the bridges will generate as tunnels with a nether brick floor and netherrack walls and ceiling. Be careful when wandering around here, because if you're not careful you could be thrown off the bridge by an explosion, knocked back by an attack, or attacked from the other side of the fortress by the marauding blazes and ghasts.

Both types commonly generate, however a lava well room acts as a transition between a walkway and a corridor, and vice versa. The corridors are most loot heavy. They generate with the chests and nether wart farms. However, both types can still generate blaze spawners.